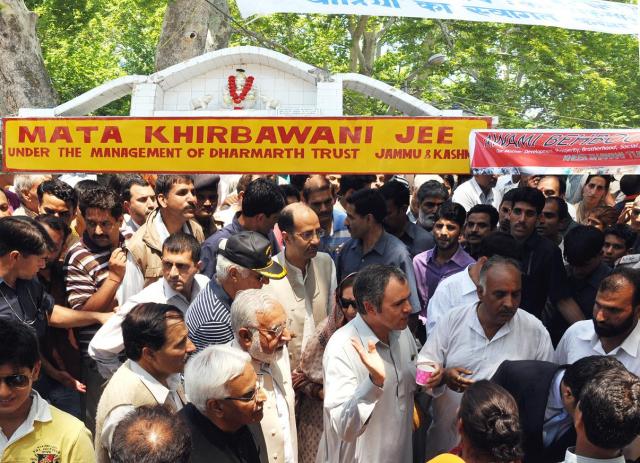 Talking to media on the sidelines of his visit to Khir Bhawani here, the Chief Minister said that the presence of a large number of Muslims and Sikhs along with Kashmiri Pandits at Khir Bhawani demonstrate the traditional harmony and love between various sections of the society in Jammu and Kashmir.

Omar interacting with the devotees on the occasion conveyed his greetings to them and to entire Kashmiri Pandit community. He wished their welfare, and safe and peaceful return to the Valley.

Chief Minister said that many attempts had been made to damage this trait but people foiled the ill designs time and again exhibiting their firm faith in Kashmiriyat.

Omar said that his Government is determined to nurture amity, love, brotherhood and mutual trust between various sections of the societies and the people of different faiths. “We have to join hands to restore and bloom Kashmiriyat and help equitable and faster development of the State”, he said adding that Kashmiriyat is incomplete without Kashmiri Pandits.

The Chief Minister said that a multifaceted programme for the return of KPs to the Valley is already in place. He said Government has introduced new initiatives to facilitate the return of KPs which include earmarking of posts in the Government departments. “The construction of transit accommodation at Budgam, Mattan and other places is on full swing”, he said.

In reply to a question, the Chief Minister said that the response by Kashmiri Pandits to the new initiatives of the Government is highly encouraging. “For about 4,000 jobs we have received more than 16,000 applications from the KPs youth”, he said adding that some 2,000 posts have been filled up so far while screening process is going on for rest of the posts.

Omar said that lack of sense of security compelled KPs to leave their places and his Government is taking all steps to restore it back in the community. “We are working to rejuvenate the relations especially between the youth of both of the communities which have damaged during the period of militancy. The new generations have to be reminded of the traditional amity and brotherhood in which their forefathers lived peacefully. This has to be rebuilt and strengthened”, he observed.

s. Payal Abdullah was accompanying  Omar, while the Minister for Finance,  A.R. Rather, Advisor to Chief Minister,  Mubarak Gul, the Minister of State for Tourism,  Nasir Aslam Wani, the legislators Sheikh Ghulam Rasool and  Vijay Bakaya, the prominent members of the organizing committee of Mela Khir Bhawani and the large number of KPs received the Chief Minister warmly at Khir Bhawani.

Giving details of the development of Khir Bhawani complex, the Minister of State for Tourism said that Rs. 15 crores have been provided for the construction of various facilities and infrastructure in the complex.