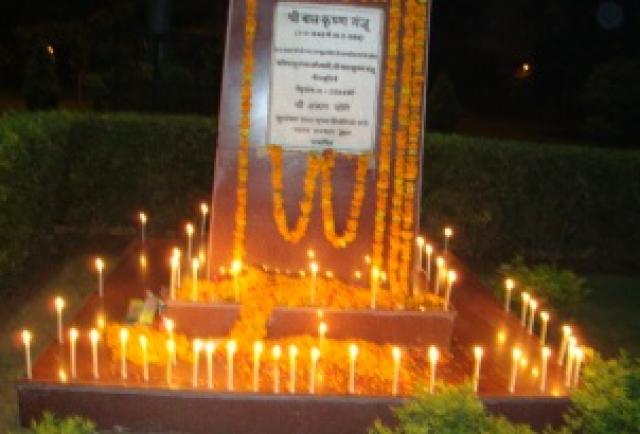 
Martyr’s Day is an occasion to remember those who sacrifice their precious lives for some noble and greater cause. Every nation and every race has marked one or the other day for the purpose. observes its martyr’s day officially on January 30, the day father of nation-Mahatma Gandhi fell to the bullets of assassin. Commemorative bust of Shaheed (martyr) Bal Krishna Ganjoo was festooned with flowers and the environment of the huge and striking park garden was serene, inspiring and mesmerizing. Emotionally surcharged environment evoked memories of the departed souls and the supreme sacrifices they offered for the larger good.

It was on September 14, 1989 that one of their tallest leaders Pt. Tika Lal Taploo was assassinated in broad daylight in a busy area of , just near his residence. Pt. Tika Lal Taploo was not the only Pandit to be murdered by brute marauders disguised as the Soldiers of Allah. He in fact was the first in the long list of community members eliminated subsequently till the time entire population was forced to leave the vale of . Shaheed Tika Lal was not exterminated by any outsider or ‘Guest Militants” as they were later defined. He was gunned down by local boys, who surely must have got benefited in one way or the other by the humane nature of Pt. Taploo.

Around 2000 members of the community including sessions judge N K Ganjoo, journalist and writer P , Telecom engineer B K Ganjoo ultimately paid the price for not heeding to the warnings.

Paying homage to all martyr’s speakers recalled the events of 1989-90 era of Kashmir valley and reminded people present about the situation prevailing 20 years earlier in valley. Talking about Pt. Tika Lal Taploo and the way this brave son of mother stood firm on his convictions, he said, continues to inspire generations of patriots. Cowardice act of eliminating Kashmiri Hindus physically has failed to silence the voices of reason and nationalism.  Function concluded with the combined prayers and singing of Bhajans lead by Veena Pandita.