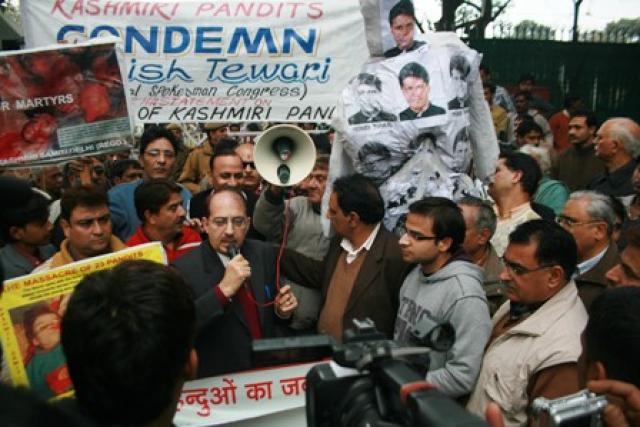 January 27 (Scoop News) –  Kashmiri Pandits on Wedensday organized a strong protest outside Congress Headquarters in New Delhi to condemn the statement of Congress Spokesperson Manish Tiwari and later on torched the effigy of Manish Tiwari.
Hundreds of Kashmiri Pandits assembled in front of Congress headquarters in New Delhi and shouted slogans against the argument of Congress Spokesman, Manish Tiwari in which he had said that KPs were driven out of the valley due to "fear psychosis of then Governor Jagmohan". Terming the congress spokesman’s statement like rubbing of salt on the wounds of lacs of community members, who are compelled to break bitter bread in all the corners of country.

"The statement of the Congress Spokesperson has hurt the Pandit community which completed two decades in exile on 19th January, 2010. Manish Tiwari certainly needs a crash course in the history of Kashmir and perhaps entire India. It pains us more to know that the statement comes from a person whose father Prof. V.N. Tiwari was killed during terrorism in Punjab. Would he have tolerated mockery of his father’s killing?" said Roots In Kashmir Chief Coordinator Sanjay Peshin.

"The statement comes under the shadow of ‘Quiet Diplomacy’. We Kashmiri Pandits wonder if Manish Tiwari has changed colours and jumped ahead to become a ‘separatist spokesperson’! An entire community uprooted from the land of their ancestors is today struggling for its identity. The weak-kneed Indian state shamelessly panders to Islamic terrorists and separatists who claim they are the final arbiters of Jammu and Kashmir’s destiny." said Lalit Ambardar, an activist.

President AIKS, Moti Koul said that Manish Tiwari’s argument on NDTV that Kashmiri Pandits were driven out of the Valley due to fear psychosis of Governor Jagmohan, is like rubbing, salt to our injuries.
" It is a wrong notion that is being cultivated and it has hurt the Kashmiri Pandit Community who are in their 20th year of exile," he said In a statement issued here on Wednesday and added that a statement like that coming from the official spokesman of the national political party either is an attempt to keep the reality away from the people of the country or simply to cater to a vote bank constituency.
He said that it seemed that the history of exodus was being rewritten by manufacturing the causes of exodus. "Here I am tempted to quote a judgment of NHRC sometime back that what happened to Kashmiri Pandits is akin to genocide. Kill one scare one thousand was the policy adopted by the militants who wanted Kashmiri Pandits to leave the Valley, along with it a climate of fear was created in the print media Religious places were used to create scare in the minority community which ultimately led to their exodus".
We demand an immediate unconditional apology from the Congress Spokesperson or a clarification; failing which a mass protest campaign throughout the country would be launched.