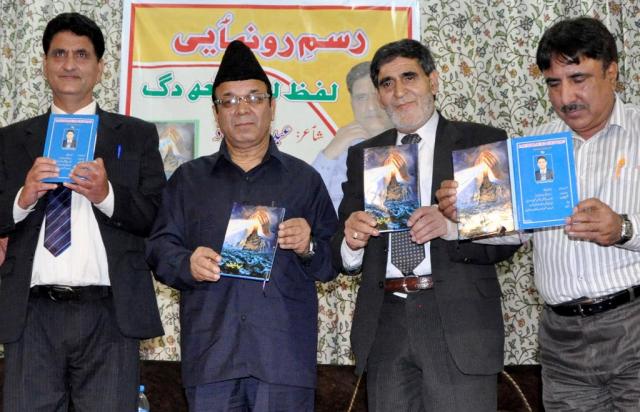 Srinagar, June 4  (Scoop News) –Minister for Finance and Ladakh Affairs,  Abdul Rahim Rather today reiterated Government’s resolve to promote Kashmiri language adding that every possible support would be provided to overcome various challenges and difficulties faced by the language at different levels including academics and literature.

Speaking at a function organized in connection with release of book Lafz Lafz Chu Dag comprising poetry of a young poet, Abdul Rashid Shad in the Auditorium of Radio Kashmir, Srinagar today,  Rather said that Kashmiri language has centuries’ old rich history behind it which is embedded in the concept of secularism and socialism. In this connection he quoted some couplets of famous poets, Ghulam Ahmad Mehjoor and Abdul Ahad Azad and said their poetry has such a direct appeal and impact on the conscience of people which would have not been possible by any lecture or narration.

The function was jointly organized by Radio Kashmir, Srinagar and Markaz-e-Adab-W-Saqafat with an objective to provide platform to the young writers and poets.

Rather said that the concept of Kashmiriyat is incomplete without Kashmiri language adding that “all of us including poets, writers and Government functionaries have an obligation towards promotion of Kashmiri languages which should be fulfilled honestly”.

The Minister on behalf of  Markaz-e-Adab-W-Saqafat presented this year’s literary award, Khilat-e-Noor to  Bashir Arif. The award comprises a citation and Rs. 51, 000 cash.

Arif, in his welcome address said that the function was a sequel to provide platform to the writers and encourage them to exploit their literary potential.