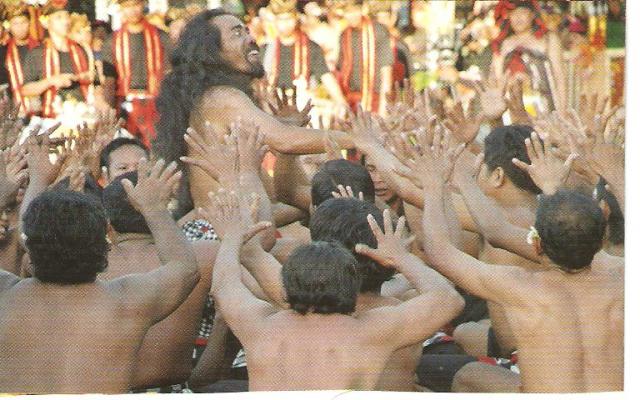 “Cak,Cak,Cak.cak,cak,cak,cak,cak,cak……” , when you hear that sound, it means that the dance performance has begun. Get ready for something extraordinary.

Next to Uluwatu temple at the southern tip of Bali, there is an open air amphitheatre where a local group of dancers perform the kecak dance daily. The performance usually starts at 6 pm and ends when the bright blue sky turns black.

Kecak is one of Bali’s icons as an art performance, and your visit to the island will really be incomplete id you don’t witness this dance, which was composed around the 1930’s, wuth a group of men ( around 40 ) wrapped in black and white square pattern fabric ( like a chess board ) being the source of the sound which becomes the title of the dance. They enter the stage shouting out the sound “cak” in highly organized rhythm and harmony, their hands rise to the sky and their feet hit the ground. Then they form a circle while making sounds like gamelan (traditional instrument), with their voices.

The dances tells the story of Ramayana, an epic originally from India, which spread to Indonesia together with the spreading of Hinduism in the archipelago. The story is about Rama, the King of Ayodia, who because of internal conflict in the kingdom, was sent into exile. Sita, his loyal wife and his brother, Laksamana insist to follow him into the forest.