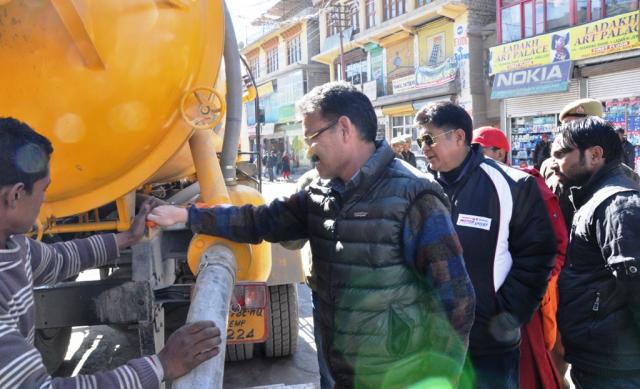 Leh, November 13 (Scoop News)-CEC LAHDC Leh Rigzin Spalbar today convened a meeting with the public representatives of Leh Phumdo and also attended by DC Leh Tsering Angchuk, ADC Tsering Morup, Councilor Upper Leh Gyen Nyantak, nominated councilor Tsering Angmo and Lasu Shafi at Leh conference hall. The purpose of the meeting as stated by ADC who is also heading NAC Leh was to highlight on the various activities carried by NAC in Leh town, its achievements and sanitation staff status which was presented through a power point presentation.

CEC addressing the meeting stressed on the fact that unless the public don’t step forward in keeping the town clean, govt. alone cannot promise cleanliness of the town. “Cleanliness calls for a joint and coordinated effort, if each mohallah takes the responsibility of keeping their surroundings clean making proper use of dustbins, then, govt. too can perform their duty efficiently by using their available men and machine wherever needed or called by the public,” asserted Spalbar. He further told that to ensure cleanliness NAC is soon going to provide with four (4) dustbin system for proper deposal of the wastes and garbage and appealed the public to make proper and conscious use of them.

During the meeting, in a common voice the representatives of Leh Phumdo demanded to make the street lights functioning, increase the frequency of garbage carrier vehicle per week, built toilets at Skalzing near FCI store and one at truck terminal near Ibex colony, suggested for having a dhobi-ghat and to take official action against those who overlook the warnings of mohalla people and numberdar and litter the road with kitchen waste (thutchu) and  the taxi drivers who wash their taxis in mohallas or roads and litter around with junks.