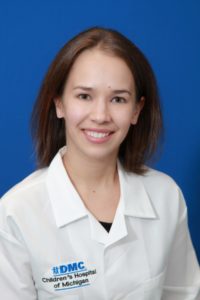 Widely considered one of the greatest medical achievements of modern civilization, vaccines have prevented countless cases of disease and saved millions of lives.

Lauren Snabb, M.D., pediatrician on staff at the Children’s Hospital of Michigan DMC, says that because vaccinations have been so effective in preventing many infectious diseases, parents may not realize that the threat of acquiring these diseases is still present today.

“Many children have died from diseases that vaccines now prevent. These include whooping cough, measles, and polio. Germs that lead to these deadly conditions still exist today, but because most babies are routinely protected by vaccines, we don’t see these diseases nearly as often in this country. When parents choose to leave their child unimmunized, this will not only place that child at risk of acquiring deadly diseases, it can endanger the lives of other children as well,” she says.

National Infant Immunization Week (NIIW) is April 22-29, 2017, a good time to raise awareness of several important milestones that have been reached in controlling vaccine-preventable diseases among infants worldwide. According to the Centers for Disease Control (CDC), vaccines have drastically reduced infant death and disability caused by preventable diseases in the United States.

In addition:
• Through immunization, we can now protect infants and children from 14 vaccine-preventable diseases before age two.
• In the 1950’s, nearly every child developed measles, and unfortunately, some even died from this serious disease. Today, many practicing physicians have never seen a case of measles.
• Routine childhood immunization in one birth cohort prevents about 20 million cases of disease and about 42,000 deaths. It also saves about $13.5 billion in direct costs.
• The National Immunization Survey has consistently shown that childhood immunization rates for vaccines routinely recommended for children remain at or near record levels.

It can be easy to think of these as diseases of the past. But Children in the United States still get some of these diseases.

In fact, the Michigan Department of Health and Human Services recently confirmed Michigan’s first case of measles in southeast Michigan. The United States experienced a record number of measles cases in 2014, with 667 cases from 27 states reported to the CDC. This was the greatest number of cases in the U.S. since measles was eliminated in 2000.

Dr. Snabb says outbreaks of preventable diseases can occur when many parents decide not to vaccinate their children. She advises parents to speak to their child’s pediatrician if there are any concerns about the safety and effectiveness of vaccinations, which undergo careful review by scientists, doctors, and the federal government to make sure they are safe.

Children’s Hospital of Michigan offers immunizations through appointments with a pediatrician. Additionally, an Immunization Station Clinic is offered to children of all ages – six weeks through eighteen years- if they qualify under the Vaccines for Children (VFC) program. Visit https://www.childrensdmc.org/our-services/all-specialties/chm/immunization-station for further information.
###
About the Children’s Hospital of Michigan, www.childrensdmc.org
For 130 years, the Children’s Hospital of Michigan has been dedicated to providing high quality care to children and adolescents in a caring, efficient and family-centered environment. With more than 40 pediatric medical and surgical specialty services, the hospital draws patients from nearly every Michigan County, 39 additional states, and 22 countries, annually and provides the highest level of pediatric specialty care available for children. The hospital is a national leader in cardiology and heart surgery, neurology and neurosurgery, nephrology, and orthopedics. It is ranked as one of America’s best hospitals for children and sees more children than any hospital in the state. Children’s Hospital of Michigan is one of eight hospitals operated by the Detroit Medical Center (DMC).