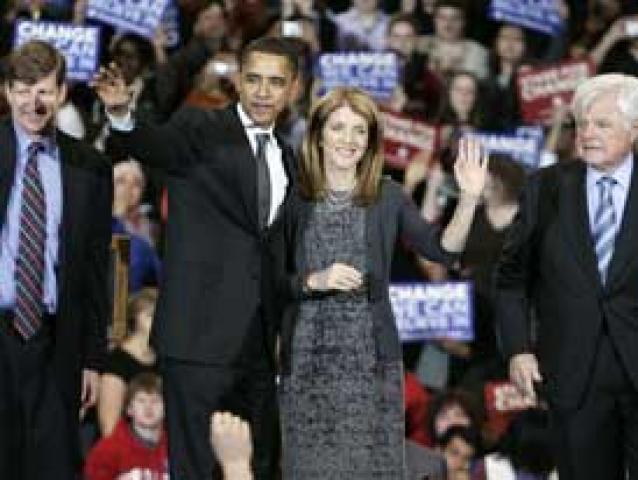 Today Senator Ted Kennedy gave his endorsement to Senator Barack Obama. However, it was not only Uncle Ted, but Governor Patrick Kennedy and Caroline as well. This is an endorsement, which serves to bring the far left of the Party into Obama’s campaign and will certainly strengthen the Illinois Senator’s bid for the Party’s nomination going into “Super Tuesday.”

This endorsement of the Kennedy’s comes on the heels of a landslide victory in the South Carolina Primary. Ted Kennedy in his speech stated that Barack Obama is the candidate for change. One could interpret much of Kennedy’s speech as a thinly veiled attack against the Clintons. Ted Kennedy spoke a lot of about the fact that it is time to change the tactics of politics and that Barack Obama is a look toward the future.

Part of the reason that Senator Kennedy endorsed Obama is because Bill Clinton has really been sticking his foot in his mouth lately. Perhaps former President Clinton believes that he is untouchable on issues of race, but his analogy of Barack Obama’s campaign to that of Jesse Jackson was enough to make the Democratic Party cringe and was certainly a contributing factor in Barack’s overwhelming victory in South Carolina.

This is the kind of positioning that campaigns do in order to belittle the win of another candidate, but Bill Clinton using an analogy of race as a determining factor went too far. It almost seemed as though the voters of South Carolina made the victory so large so as to dispel any notions that it might be race alone that was the reason for Obama’s victory.

One of the issues facing Hillary Clinton is that at first, she was for the war in Iraq, but now she is against it. However, when Barack is challenged on this issue his record stands for itself. Hillary Clinton will be hard-pressed to curtail the momentum that the Obama campaign has gained in recent days. It is clear that Obama has the potential to become a juggernaut into the general election and Republicans may just find themselves in a contest, which they have, no hope of winning.

I am not a Democrat, but I believe that Barack Obama is a good man and while I may not agree with his political views or his plans as to how to help the country, I cannot help but like the man himself. It is possible that part of the draw that Obama has is that he is relatively unknown. However, it may be that whether you agree with his politics or not he seems to stand behind what he believes.

Filed under: Politics, US
Share Tweet Pin G Plus Email
previous article: BCCI Planning to Pull out of Tri-Series
next article: Goin’ South: A Review Of Richmond, Virginia