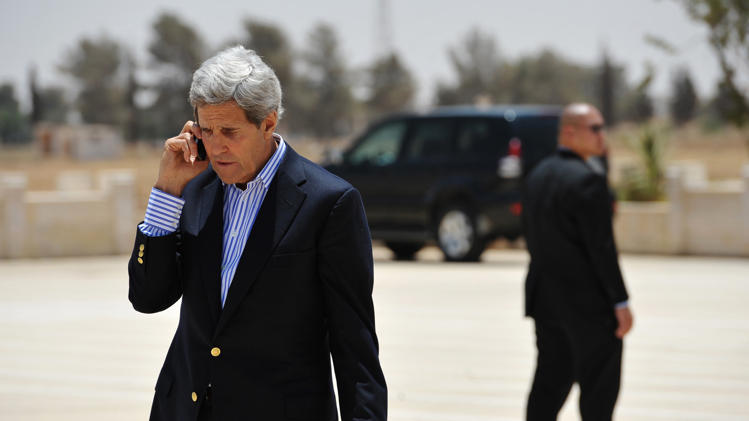 Secretary of State John Kerry on a phone as his bodyguard make sure the coast if clear and stands ready to respond in case the senior U.S diplomat is attacked before boarding a helicopter to Amman, at Mafraq air base in Saudi Arabia . Saudi Arabia is the world’s chief sponsor of Islamic terrorism around the world. Photo credit: Mandel Ngan/Getty images.

Secretary of State John Kerry mentioned in an interview in Geneva on Thursday that the “military option” was still on the table if Iran did not live up to its nuclear commitments under the Geneva deal.

That statement had many people scratching their heads and wondering what Kerry was even talking about since Iran is complying with all the rules under its agreement to end parts of its uranium enrichment program.

“Sometimes, it is in (our) interest that international exchanges go ahead in the form of negotiations and diplomacy, and diplomacy needs its own rules; in this issue (negotiations with the world powers) while the principles should be safeguarded, we should also keep vigilant in order not to allow them at all to impair our redlines and principles,” Saeedi said.

Kerry’s war talk also drew a sharp response on Friday, from Iran’s Deputy Chief of Staff of the Iranian Armed Forces for Cultural Affairs and Defense Publicity Brigadier General Massoud Jazzayeri  who downplayed the US  for its threats and war rhetoric against Iran, and said they, meaning the U.S “don’t dare to attack Iran because they have no hope of victory in such a war.”

The senior Iranian military commander said that “the US government knows that the military option against Iran is not practical.”

The United States has said that “military action” is a main option for the White House to deter Iran’s progress in the field of nuclear technology.

“Iran has warned that in case of an attack by either the US or Israel, it will target 32 American bases in the Middle-East and close the strategic Strait of Hormuz” (source: IRGC Official: Iran’s Redlines Not Affected by US Threatshttp://english.farsnews.com/newstext.aspx?nn=13921106000914).