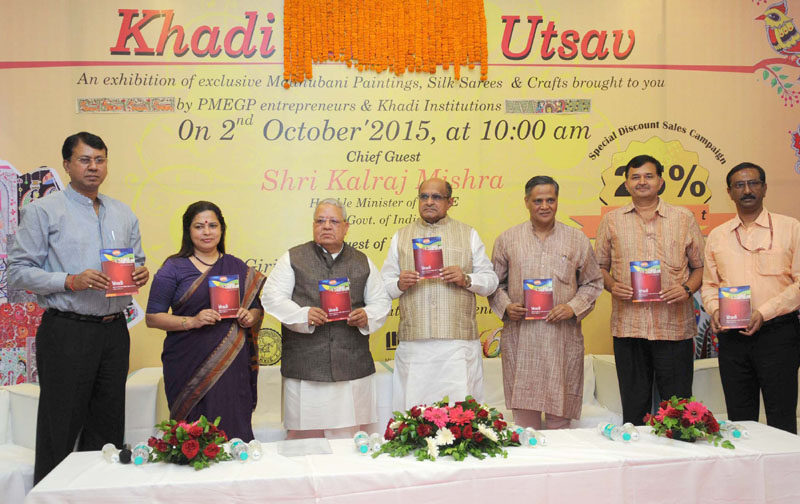 The Union Minister for Micro, Small and Medium Enterprises, Mr. Kalraj Mishra releasing the publication at the launch of the Special Sales Campaign and “Khadi Utsav”, on the occasion of Gandhi Jayanti, in New Delhi on October 02, 2015. The Secretary, Ministry of Micro, Small & Medium Enterprises, Dr. Anup K. Pujari AND other dignitaries are also seen.

New Delhi (PIB-GR-TYP-BIN): Mr. Kalraj Mishra, Union Minister for MSME said that Khadi is the symbol of National unity and integration, hence every citizen should purchase Khadi. After inaugurating ‘Khadi Utsav’ organized by Khadi Gramodyog Bhawan, on the occasion of Gandhi Jayanti, on October 2, the Minister said that Khadi is able to compete in today’s global marketplace and to realize the vision of Gram Swaraj, it is necessary to develop Village industries. He emphasized that Khadi exhibitions should be organized in every district of the country. He also said that the visionary Prime Minister is well aware the importance of Khadi, therefore he advocated to the people to purchase Khadi.

Mr. KC Tyagi, Chairman, DRPSC on Industry in his address congratulated everyone associated with Khadi Programme. He told that Ministry of MSME is competent enough to provide employment to lakhs of people.

Mrs. Meenakshi Lekhi, Member of Parliament congratulated everyone on Gandhi Jayanti and appealed to the people specially women to wear Khadi Saree.

Mr. Arun Kumar Jha, CEO and Commissioner KVIC told to media that the objective of ‘Khadi Utsav’ is to revive the dormant Khadi production which was famous for its sophistication and fineness, as well as to rejuvenate various the artists, who are generally working as ‘Job Workers’ now. In the Exhibition which has been setup, the products comprising Khadi sarees, dress material and other ethnic products would be a delight for the connoisseur of fabrics and fine art.

On this occasion a colorful Khadi Fashion Show was also organized by the Students of International design institute in association with designer of Khadi Gramodyog Bhavan KVIC, New Delhi. The Khadi Products directory was also released by the chief Guest on this occasion. The special discount on the sale of Khadi products shall also be offered to the customers on the occasion of ‘Gandhi Jayanti’.