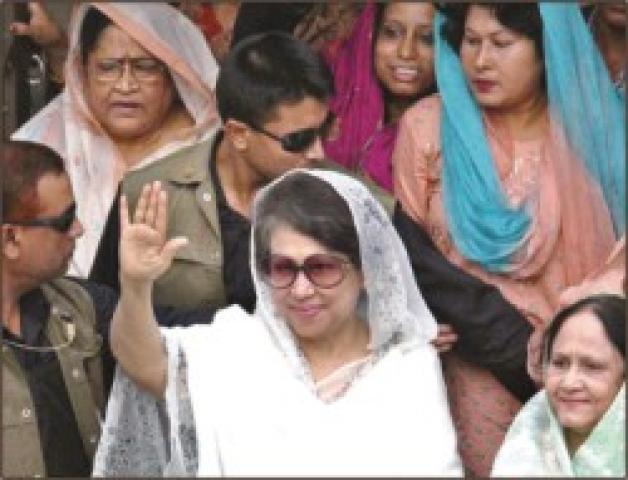 Unveiling election manifesto with a slogan ‘save the country’ ‘save the people’, BNP Chairperson Khaleda Zia today said her party will bring amendment to the caretaker government system and will scrap the Special Powers Act 1974 if voted to the power.

"Amendment will be brought to the caretaker government system after detailed discussions in parliament so that a free, fair and neutral election could be held after every five-year term," she said while rolling out the manifesto for the December general election in a city hotel.

The former premier urged the countrymen to vote for the BNP-led four-party alliance candidates in the coming election and said, "If the party is voted to power, all the representatives have to disclose their wealth statement within 30 days after taking oath."

Parliamentary standing committees would be formed in the second session of the parliament, and opposition members also will be nominated chairmen of the committees, she said.

"A party or an alliance would not be allowed to boycott the session but they could continue the practice of walkout on specific issues," the BNP chief said adding national important issues would be resolved through bilateral discussions in the parliament.

"None would be allowed to make any indecent comment on any late national leaders and no member of the parliament will be allowed to remain absent for 30 days at a stretch," she said.

Party leaders, diplomats, eminent citizens, among others, attended the occasion, which started with national anthem and party song.

Khaleda in her 36-point election manifesto promised to the nation that her party will introduce health insurance system for the poor, unemployment allowance and national employment generation project so that at least a person of family will get permanent work.

The BNP chief assured the people that they will take effective measures to reduce prices of essentials, curb corruption, restore law and order, combat terrorism and ensure the independence of judiciary and make food security.

She promised to establish a participatory parliament, responsible political environment, effective understanding between the state and social forces and a skilled and neutral administration to make the country prosperous.