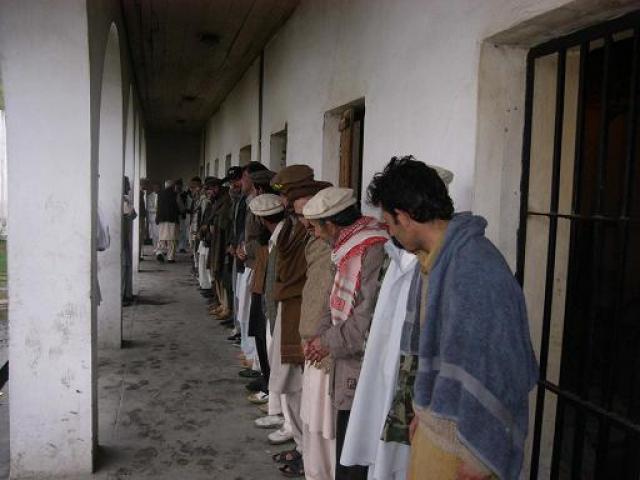 CHITRAL: Workers of Awami National Party (ANP) celebrated renaming of North West Frontier Province (NWFP) as Khyber Pukhtoonhwa at Chitral. A large number of vehicles of party workers carrying red flags of ANP arranged a rally passing through Chowni Bridge Danin road and . The rally ended at ANP office near polo ground.  The party workers also distributed sweets among themselves and workers at its office. Later on a public meeting was also held at ANP office. Addressing on the occasion chief patron of ANP M.I. Khan Sarhadi Advocate said that ANP leaders have sacrificed for this land. He said that although our provincial government facing great challenges regarding tense situation in the province and increasing number of terrorism but our military and civil forces overcome these problems. He paid rich tribute to Pakistani Army and security forces for controlling of terrorism in the country. He said we are ready for any sacrifice for our motherland. He said that Pukhtoon nation having five characteristics and specialty and that is why our province was renamed as Khyber Pukhtoonhwa. They paid rich tribute to ANP pioneer Abdul Ghaffar Khan and appreciated his philosophy of liberation and independency.

Maulana Abdul Latif a religious cleric felicitated the nation on renaming of the province. He said that Pukhtoon are a brave, sincere and loyal nation that is why being a religious scholar I joined this party. He stressed upon other ideological religious clerics to must come under the umbrella of ANP because any Pukhotton is a strong Muslim. He highly appreciated volunteerism and social working of ANP and its pioneer Abdul Ghaffar Khan. Chairman Muhammad Wali read a poem in favor of renaming of the province. Shah Wazir senior vice president ANP Mastuj congratulated the nation for recognition their real status and renaming of the province. He demanded for implementation of Islamic Sharia in the country. Iftikhar Jan, Qurban Ali, Ziaur Rehman, veteran politician Mahboob Alam, Abdul Murad, and ANP president Syed Muzaffar Hussain Shah also spoke on the occasion. They announced that Chief Minister have   approved 350000 for launching Bacha Khan football tournament and fund have already been released. He tournament would be kicked in May. They stressed upon the party worker for preparation to participate in forthcoming local bodies election and to elect ANP candidates.  Meanwhile an aged person Dilbar Khan along with 18 family members joined ANP who was PPP worker. At last ANP workers distributed sweets among the workers and disbursed the public meeting.

Sweets distributed among the prisoners of district jail Chitral.

CHITRAL: On the happy occasion of renaming of NWFP as Pukhtoonhwa superintendent of district jail Chitral distributed sweets among the prisoners of Chitral jail on the directive of Inspector General of Prison. District President of ANP Syed Muzzafar Hussain Shah was chief guest on the occasion who personally distributed sweets among the prisoners. On this occasion he thanked president, Prime Minister of Pakistan and leaders of ANP for renaming the province and now nationality and real status of Pukhtoon nation first recognized. He also listened problems of staff and prisoners and assured to solve these problems by approaching to provincial chief.