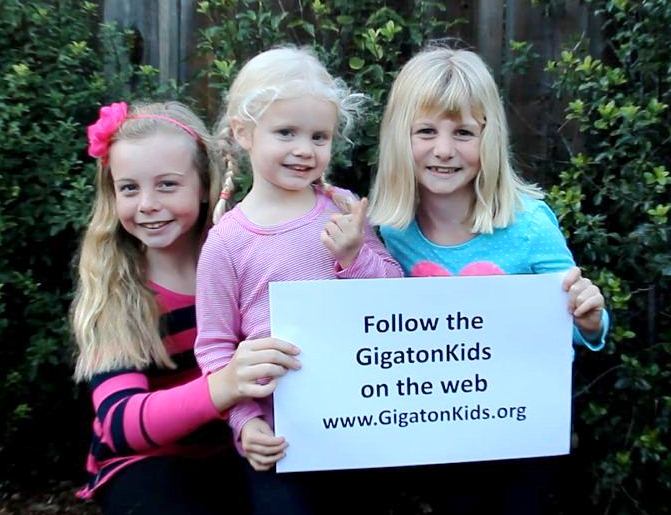 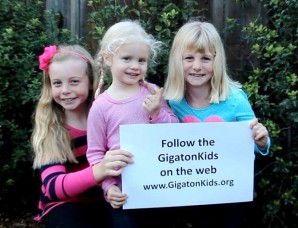 1888 Press Release – Eleven children and two young adults produced a one-minute video explaining deforestation and how it impacts the planet.

San Francisco, CA – The video is available on YouTube at: http://youtu.be/Y-LHG0eG5kU and also posted on the GigatonGifts website: http://www.GigatonGifts.org

“I expected more parents to decline after they reviewed the script,” said Elton Sherwin, Executive Director of the Carbon Zero Institute that sponsored the project. “The parents were mostly Rotarians or attend an Evangelical Christian church, and we did not know how many parents wanted video of their young children all over the Internet,” continued Sherwin. “After reviewing the script, all the families we contacted said yes.”

The voice over is read by two sisters eight and ten years old:

Listen up, Grown Ups.
Because THIS IS IMPORTANT

It’s about the BIG PICTURE of our WORLD.
The world you are giving to us.

Every day almost 3 billion people cook over smoky stoves and open fires.
That’s what they have to do to feed their families.

But over 2 million people die every year breathing the smoke!
Billions of trees are cut down for firewood.

And without the trees…
The soil washes away and food won’t grow.

And the animals that lived there start to die.

But WE know there is hope.
NEW trees help bring back the animals and the crops.

Solar stoves help protect the trees and the kids!

Join us today at
GigatonGifts.org

GigatonGifts was launched in December of 2013 by a group of Silicon Valley parents concerned about environmental issues.

Worldwide, almost 3 billion people cook or eat meals cooked over wood or charcoal fires. The soot from these fires causes respiratory ailments that kill 2 to 4 million people a year, most of them women and children. The reliance on wood and charcoal for cooking has created areas of severe deforestation in over 50 countries.

Through the GigatonGifts website (www.GigatonGifts.org), customers can purchase trees for reforestation projects in severely deforested areas of Africa and Haiti, as well as fuel-efficient, clean-burning stoves to replace the health-damaging wood and charcoal stoves commonly used by families in these areas.

GigatonGifts has partnered with the Eden Reforestation Projects which has planted over 65 million trees since 2005. GigatonGifts is committed to reversing deforestation and its accompanying problems, both by replanting devastated forests and by reducing the demand for wood-based fuel. The goal is to fund the planting of one billion trees and eliminate the use of open fires for meal preparation.

GigatonGifts is staffed entirely by volunteers. Co-Founder and Executive Director Elton Sherwin worked for 15 years as a venture capitalist and is an authority on the economics of climate change. In 2010 he authored Addicted to Energy. Co-Founder Craig Wesley has an extensive executive-level background in entrepreneurial, early stage, and Fortune 100 companies.