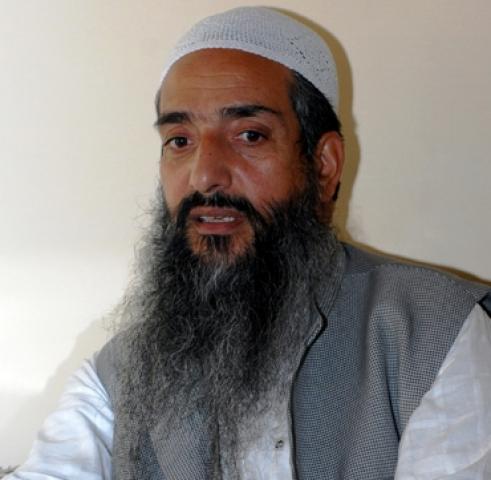 A high level delegation of Jama’at-e-Islami J&K, led by its Ameer Sheikh M. Hassan visited the residence of Showkat Ahmed Shah at Lal Bazar and paid glowing tributes to him for his ever lasting and glorious services to the cause of Islam and the Muslims.
The delegation expressed its deep solidarity with the bereaved family and described his death an irreparable loss to the Millat-e-Islamia . Ameer-e-Jama’at stressed that without practicing Islam in its true sense and mutual unity, the Millat can not achieve its past glory. It is bounden duty of Islamic scholars and thinkers to come forward with all enthusiasm and full faith to accomplish this dream and keeping all differences of secondary importance aside, firmly unite on the basic teachings of Islam.

Ameer-e-Jama’at while remembering great services rendered by Moulana Showkat to Islam and for unity of Millat, described him as one of the heroes of the Islamic history and prayed to Almighty Allah for his eternal peace. The delegation comprised of Qazi Ahadullah. Muzaffar Jan, Gh Muhammad Bhat, Faheem M Ramzan and Gh Rasool Bhat.

Expressing grief and sorrow over the attack on the religious leader which apart from taking away his life also resulted in death and injury to many Mohammed Dilawar Mir said such inhuman act is antithesis of both religion and politics. He said that late Moulana was engaged in conduct and pursuit of religious instruction and his departure from the scene would be felt by the entire society at large.

The Panthers Chief said that the people of have been wedded to secularism, peace and brotherhood far away from violence for centuries. This kind of brutal assassination of a religious person deserves condemnation by all people at all levels. There can be difference in opinions but that does not mean that the difference will be settled by bomb-blasts or bullets. The Panthers Party Chief demanded a judicially inquiry by the sitting High Court Judge on this assassination.

In his condolence message to the members of the bereaved family the Panthers Chief has expressed sympathy with them with a prayer that Allah shall grant peace to the departed soul.

He said that the deceased Maulana was a man of high stature with pious qualities for which he will be remembered forever.

Meanwhile complete Bandh was observed in valley against the assassination of a noted religious scholar and Jamiat-e-Ahli Hadees, President Molvi Showkat Shah. All shops, private offices, banks and financial institutions, petrol pumps, business establishments remained closed throughout the day in response to the Bandh call. Public transport was also off the roads,

It may be mentioned here that Militants had earlier fired at his car in 2006 and hurled a grenade at his house in Lal Bazar in outskirts of city in 2008.

He was among the first who had demanded a fresh inquiry into the killings of separatist leaders including Mirwaiz Farooq, Abdul Gani Lone and Qazi Nissar.

Following his statement, Hurriyat leader Abdul Gani Bhat and Sajjad Lone had openly said that these leaders had been killed by "our own men".