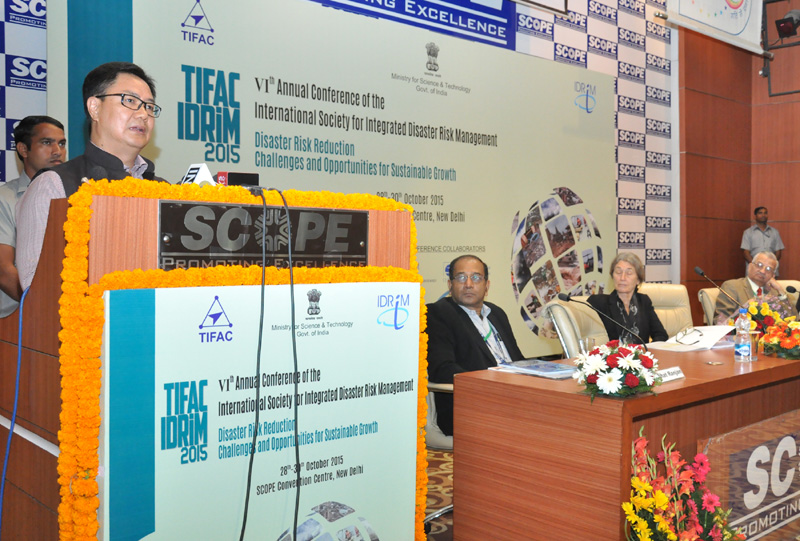 The Minister of State for Home Affairs, Mr. Kiren Rijiju addressing at the inauguration of the 6th Annual Conference of the International Society for Integrated Disaster Risk Management, in New Delhi on October 28, 2015.

India Is Globally One Of The Leading Countries On Disaster Management

New Delhi (PIB-GR-TYP-BIN): The Minister of State for Home Affairs, Mr. Kiren Rijiju called upon the private sector to involve in Disaster Risk Reduction (DRR) efforts. Addressing the 6th Annual Conference of the International Society for Integrated Disaster Risk Management on October 28, Mr. Rijiju said DRR is the Government’s priority but a lot more investment needs to be done. Without DRR, any developmental activity will be incomplete, he added.

Mr. Rijiju said global warming and climate change are making the earth more prone to disasters and this year has been perhaps the warmest in recorded history. He said that sustainable development is the key to mitigate the causes of disasters. The Minister said disasters are an inevitability due to reckless growth and we have to constantly improve our resources to be better prepared and minimize the risks. Compared to the super cyclone that struck Odisha coast in 1999 resulting in more than 10,000 deaths, less than 20 lives were lost during the cyclone of equal intensity two years ago, he added.

The Minister said India is globally one of the leading countries on Disaster Management and over the years we have built capacities to tackle disasters effectively. He said that our objective is to make the earth a less vulnerable place to disasters and towards this end, the people should be more responsive. He said that India will be hosting the 1st Asian Ministerial Conference in November 2016 for Disaster Risk Reduction (AMCDRR) after the introduction of the Sendai Framework.