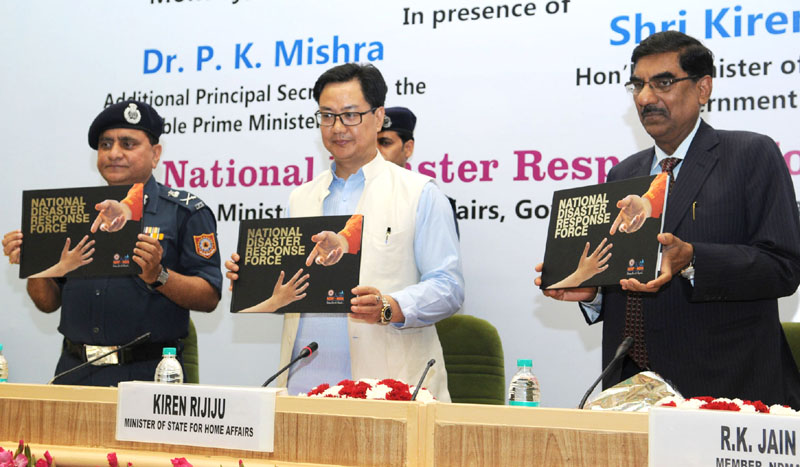 The Minister of State for Home Affairs, Mr. Kiren Rijiju releasing the brochure at the valedictory function of the National Workshop on ‘Strengthening National Response Capabilities’, organised by the NDRF, in New Delhi on March 07, 2016. The Director General, National Disaster Response Force (NDRF), Mr. O.P. Singh is also seen.

An Effective Response Is A Result Of Good Preparedness: Dr. P.K. Mishra

New Delhi (PIB-GR-TYP-BIN): The Union Minister of State for Home Affairs Mr. Kiren Rijiju has said that greater the efforts into Disaster Risk Reduction, the lesser the effort required into post-disaster response. Speaking at the valedictory function of the National Workshop organised by the National Disaster Response Force (NDRF) on “Strengthening National Response Capabilities” on March 7, Mr. Rijiju said that as the ‘UN Designated Disaster Risk Reduction Champion for Asia Region’, greater attention is now being paid in the country to Disaster Risk Reduction (DRR). The Government of India has taken measurable and sustainable steps to reduce disaster risk within and outside its boundaries, he added.

Dr. P.K. Mishra said that an effective response is a function of good preparedness. The efficacy and effectiveness of response will depend on preparedness, to which aspects such as technology, capacity building, media management and humanitarian logistics tools can contribute a great deal.

Mr. O.P.Singh, Director General, NDRF in his welcome address explained about the achievements and highlights of NDRF during the last one decade. He mentioned that the force has been performing to its fullest capacity in relief and rescue operations during disasters.