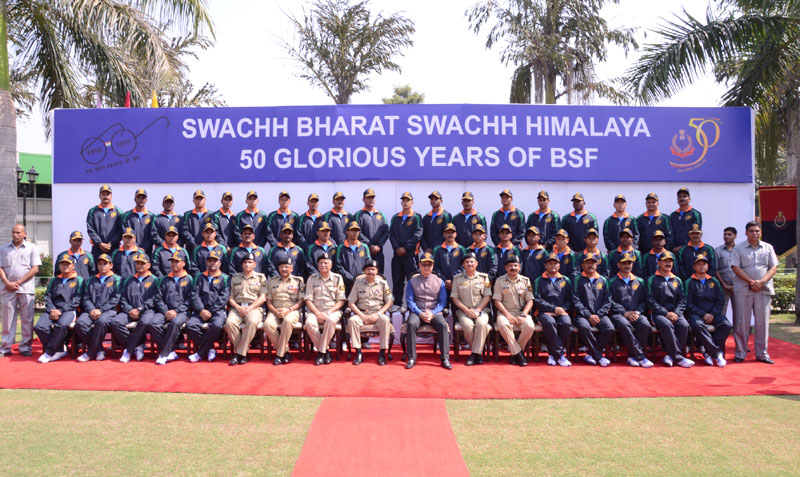 The Minister of State for Home Affairs, Mr. Kiren Rijiju in a group photo of the flagging off ceremony of the ‘Swachh Bharat, Swachh Himalaya’ campaign of the Border Security Force, in New Delhi on October 12, 2015. The Director General, BSF, Mr. D.K. Pathak is also seen.

New Delhi (PIB-GR-TYP-BIN): The Minister of State for Home Affairs, Mr. Kiren Rijiju, flagged off the ‘Swachh Bharat, Swachh Himalaya’ campaign of the Border Security Force (BSF) at a function on October 12. Lauding the BSF for undertaking the noble campaign as part of its Golden Jubilee expedition, Mr. Rijiju said vigorous cleanliness campaigns need to be conducted before cleanliness becomes a way of life for us all.

The Minister said in most countries he has travelled, cleanliness is intrinsic to those societies and their people. But back here in our country, cleanliness, discipline and orderliness leaves much to be desired. No less than the Prime Minister Mr. Narendra Modi had to underline its necessity from the ramparts of the Red Fort to turn it into a mass campaign, he added. While pointing out that the Metro in Japan remains absolutely clean despite being jam-packed, he said overcrowding and high population density cannot be an excuse to filthy living. What is required is a change in attitude in each person’s personality, he added.

Noting that the campuses of the forces, including the Cantonments, are marked by their clean environment, Mr. Rijiju hoped the BSF Clean Himalaya awareness campaign will send across the noble message to the far-flung corners of the country.

Speaking on the occasion, the Director General, BSF Mr. DK Pathak said the BSF ‘Swachh Bharat, Swachh Himalaya’ campaign will be conducted from October 12, 2015 to November 23, 2015 and includes Cycling expedition, White Water Rafting and Trek to Garhwal Himalayas during which the team members will bring back garbage and waste materials left behind on the glaciers.