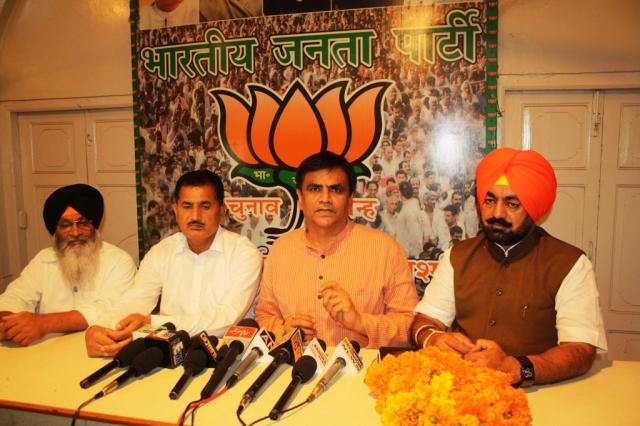 Dhankar said that on August 20, farmers from all over the country will get together at Jantar-Mantar in . Supporting these farmers would be national BJP president Nitin Gadkari and former union minister Rajnath Singh who will sit on dharna. While farmers will take to street, BJP Parliamentarians will fight this battle in the Parliament, said Dhankar.

Dhankar said changed fertilizer policy has taken away commodity far from the hands of a farmer. Fertilizer is the main input for farmers after water and seeds. Spiraling prices of chemical fertilizers have proved taxing for the farmers. The prices of DAP (Diammonium Phosphate) have increased by 2.5 times since 2010, prices of MOP (Muriate of Potash) have increased by 3.75 times and prices of SSP (Single Super Phosphate) doubled. De-control over prices of fertilizer and new nutrition based subsidy too has led to difficult availability of these fertilizers.

“The so-called nutrition based subsidy has become nutritious for importers and producers as well as the center government, instead of bringing much-needed relief for farmers. Since 2010, the nutrition based subsidy has been imposed on mixed fertilizers and the right to fix its prices lies in the hands of fertilizer manufacturers and exporters. Government has succeeded in decreasing its subsidy from Rs 1 lakh crore in 2008-09 to Rs 63000 crore, but the condition of farmers is pathetic.

Government increased prices of urea by 10 percent in 2010 and now again plans to increase the same by another 10 percent. During the last meeting of cabinet ministers on economic affairs held on June 14, it was postponed under pressure from the masses. Now government has mulled plans to adopt nutrition based subsidy for urea also, he revealed.

Dhankar demanded that farmers be given direct subsidy, instead of giving the same to manufacturers, exporters and retailers. Accounts of all the farmers should be opened and subsidy be directly deposited in their accounts. Till the time framework for this is not readied, farmers should be given fertilizers through the Control and Indicative Price Policy April 2010.

He also demanded present nutrition based subsidy policy should be suspended and the increased prices be rolled back, continuation of control policy on urea and all state be provided fertilizers as per their demands so that farmers do not face any shortage.

Dhankar said center government should immediately release interim installment of relief to all the states without any prejudice. He said that in drought hit areas, interest on agriculture loan should be abolished and loan repayment be stopped till the next crop.

It was demanded that free seeds be provided in areas where sowing has failed or got delayed due to weak monsoon and also adequate arrangements be made for animal fodder. The requirement of power supply to agriculture sector should be fulfilled on priority basis. Farmers of drought hit areas should be paid Rs 10000 per acre and special packages be given to the drought hit states. Also due to paucity of rains, in the canal irrigated areas, the canals be run to full capacity to ensure adequate water supply to the tail end areas, he demanded.