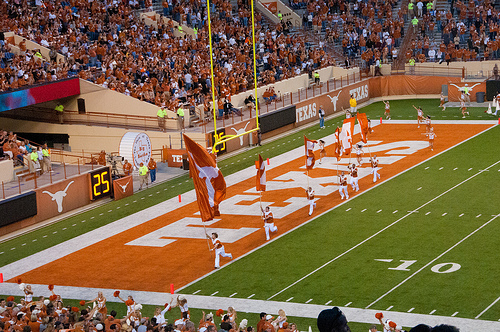 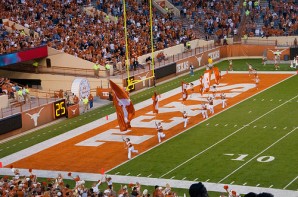 In a shocking and unprecedented development—in the history of sports, higher education, and probably humanity itself—a group of Austin “armchair quarterbacks” and self-proclaimed football experts launched a daring pre-dawn raid this morning, seizing Daryl K. Royal Texas Memorial Stadium and the offices of the football coaching staff at Belmont Hall. Buoyed by this initial success and the prospect of finally being able to express themselves beyond message boards and call-in shows, the insurgent know-it-alls and second-guessers confiscated several kegs of Keystone Light and traded them to the Zeta Epsilon fraternity in exchange for assistance in taking control of the entire campus.

Though details are still emerging, the coup was apparently catalyzed by a rousing Monday afternoon phone call placed to local sports talk radio station AM 1300 “The Zone” in the wake of UT’s disastrous loss to Brigham Young University the previous Saturday, in which the Longhorn defense was torched for 300 yards rushing by a quarterback who couldn’t make the third string for an arena league team. The caller, Brad Karldon, 40, argued that Mack Brown and his staff had “tarnished” and “forever sullied” the “righteous and pristine” reputation of the football program. Karldon went on to assert that the staff “couldn’t coach their way out of a paper bag,” and that “anyone with eyes” knew that there were “obviously better plays to be called,” before concluding with a convoluted discussion of line stunts, pre-snap reads, coverage packages, and other ideas gleaned from a lifetime of watching football from the comfort of his living room.

After surprising security guards and staff, Karldon and insurgents went about burning the coaches’ playbooks, reasoning that their own knowledge of football easily surpassed that of actual professional coaches. In a sign of the radical bent of this coup, Karldon also ordered the UT Tower demolished since, from a certain angle, it too closely resembles the owl mascot of rival Rice University. The revolutionary junta captured Mack Brown, who is reported held prisoner in a frat flophouse on South Padre Island awaiting trial for “crimes against football.” The whereabouts of Athletic Director Deloss Dodds and President Bill Powers are unknown.

Upon overseeing the destruction of the tower and the burning of the playbooks, Karldon declared himself “Genius in Charge,” and then got in his car to reassure UT boosters and recruiting prospects that the program was in good hands. “I may have missed on my prediction that Chris Rix would be a Pro Bowl NFL quarterback,” advised Karldon, “but I’ve spent enough time on Orangebloods.com to know talent when I see it.”

In his absence, day-to-day control over the football team had devolved to Paul Sanchez, 40, a high school teammate of Karldon’s who decided to join the coup because had already invested in several of the $50 golf shirts of the type worn by the coaching staff. Though, like Karldon, Sanchez has no experience coaching football, he typifies the attitude of the insurgency. His message to the team, said Karldon, would be to simply “try hard and remember that you’re Longhorns and, should difficulty arise, know that you deserve to win championships more than the other team.”

Other notable know-it-all lieutenants include Jon and Kera Rossbloom, who have taken provisional positions as Minister of Culture and Minister of Health, respectively. Though neither Rossbloom ever attended UT—and indeed this lack of direct experience with either the university or coaching seems to be a common denominator for the armchair quarterbacks—both insist that they are especially capable of restoring honor to the program.

At Mr. Rossbloom’s direction, all students who could not escape the campus have been herded to Burdine Hall—easily the ugliest building on campus—for Khmer Rouge-style reeducation into “Longhorn principles” like arrogance, self-entitlement, and myopia. Mrs. Rossbloom has thrown fruit and vegetables out of the team dining halls, replacing them with fried tacquitos, a bizarre concoction of queso and sausage, and other high-fat tailgate foods in an effort to inspire fighting spirit in what she regards as “those sissy and dumbass players.”

Smelling blood in the water, UT’s next opponent, the University of Mississippi, has signaled its willingness to travel to Austin this weekend. It was harder to get a read on the feelings of the Texas players, however. When asked whether he would recognize the new regime, quarterback David Ash, who was pulverized by an otherwise-mediocre BYU defense, mumbled something about strawberry ice cream and liking long walks on the beach.