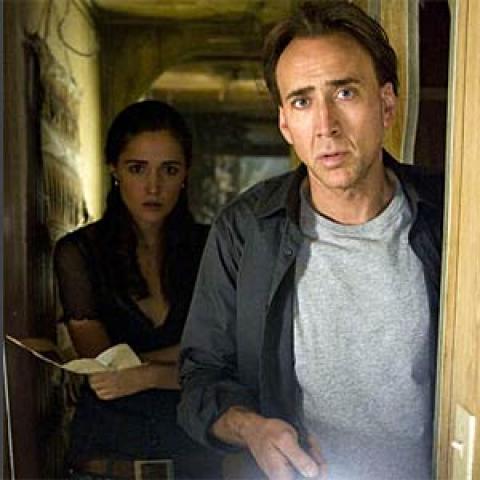 Nicolas Cage — with a timely assist from college hoops — powered sci-fi action picture "Knowing" to the top of the weekend box office with an estimated $24.8-million haul.

The gross receipts were more than one-third better than those of its closest competitor, the comedy "I Love You, Man," which took in $18 million. Finishing third was the Julia Roberts vehicle "Duplicity," her first big leading role in half a decade. It brought $14.4 million to the ticket window, according to movie data tracker Media by Numbers.

"Knowing," starring Cage as an astrophysicist bent on saving the world from apocalypse, had been expected to face a stiff challenge from the guy-oriented "I Love You, Man," which also opened FridayInstead, the Summit Entertainment release cruised, in no small part because the NCAA basketball tournament kicked off this weekend. That meant tens of thousands of young men were likely to be planted in front of the small screen rather than the silver one.

"I think the NCAA was a factor for young males," said Don Harris, executive vice president and general sales manager at Paramount, which with DreamWorks distributed the R-rated "I Love You, Man." As the latest exponent of the so-called bro-medy genre, the film was expected to score with 18-to-34-year-old males.

Combined with the fact that spring break is now in session, those potential ticket buyers, Harris said, "are going to be distracted all day long, all weekend long."

"Knowing," on the other hand, proved equally popular with women and men, said Richie Fay, president of domestic distribution at Summit, which used a strong marketing campaign centered on Cage to draw attention. In the end, the film’s performance surprised many forecasters, who had pegged it to deliver about $15 million.

"The marketing campaign kicked in at the right moment," Fay said.

In taking the top spot, Cage further demonstrated his box-office juice. The movie was his ninth No. 1 opening since 1997.

Meanwhile, Roberts’ turn in her biggest role since she gave birth to twins in 2004 proved a bit disappointing to some box-office watchers. Crystal-ball gazers had pegged Universal’s "Duplicity," which also stars Clive Owen, to bring in as much as $16 million.

But its per-theater average, an important industry metric, was considerably lower than those of the other major openings, at $5,595 across 2,574 venues.

"Any time you have the name Julia Roberts attached to a film, there are high expectations," said Paul Dergarabedian, president of Media by Numbers. "Regardless of box office, she’ll still be a big star."

Though it was off to a slow start, he predicted "Duplicity" could have significant staying power, comparing it to "fine dining" as opposed to the "fast food" offered up by "Knowing" and "I Love You, Man."

And with a potential blockbuster coming next week — DreamWorks’ "Monsters vs. Aliens" — the Disney release could soon face a serious challenge in the family category.

Fifth place for the weekend belonged to "Watchmen," the Warner Bros. superhero picture in its third week of distribution. After a raucous opening of $55.7 million, the film has plummeted, bringing in $6.7 million for a total of $98.1 million in receipts to date.

Dergarabedian said the violent and long "Watchmen" had been unfairly compared to mega-movies such as "Batman" and "Spider-Man," which leapt to $150 million and more without breathing hard.

The difference, he said, was that those weren’t R-rated films and they had a much more familiar crew of heroes and villains. "This is not a populist comic book movie," he said.

The weekend’s estimated take for all movies was $107 million. That’s a decline of 5.2% from a year earlier.