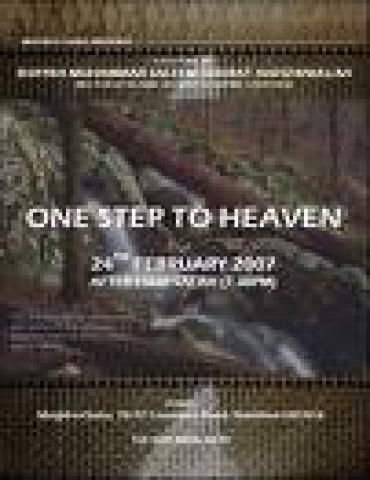 It is stated in the Qur’ân: “They ask you regarding wine and gambling. Say, in both of them is major sin, and there is some benefit for men, but the sin of them is far greater than benefit ”
(Surah Baqarah)

On the other hand some of the other Sahâbâhs  resumed that this verse did not declare alcohol Haram, so they declared that it overtakes full precaution and law, that a mediate consumption of alcohol would not be harmful.

However, shortly an incident occurred which brought about a sudden change in the situation. One day, Hazrat Abdur-Rahman Ibn Auf  had invited some of his companions, and as was the custom of the Arabs they had consumed alcohol after their needs.

Thereafter, while still in a state of intoxication, the Maghrib Salâh was performed. The Imâm who was also drunk made an error in his recitation of Surah Kafiroon. Upon this, the second step was taken to prevent the consumption of alcohol, by the revelation of the following verse: “O Believers’ do not approach Salâh while intoxicated.”
(Surah Nisaa)

This verse now declared alcohol Haraam in clear-cut terms but the consumption was for the duration of Salâh times, and at other periods it was still permissible. With this second warning many more of the Sahâbâhs  refrained completely from drinking Alcohol, reasoning that what good can there be in something that deprives one from Salâh.

There were others however, who drank liquor during the intervening periods of salâh until the following incident took place: Uthmaan Ibn Maalik  invited a few Sahâbâhs  for a meal. After the meal, as was customary liquor was served. Thereafter, they became involved in another Arab custom, reciting poetry praising oneself, family and clan and simultaneously teasing and belittling others who didn’t belong to that group.

During this gathering, Hazrat Saad Ibn Abi Waqqas  recited a few lines of poetry in which he criticized and belittled the Ansars of Madinah. Hearing this, an Ansari youth became enraged and threw a bone at him, which inflicted a severe wound on the head of Saad Ibn Waqqas .
He then complained against the youngster to Rasulullah , after which he made dua’a to Allah:
“O Allah! Grant us a clear cut for regarding alcohol.”

In response to this the 3rd and 4th verses concerning the complete prohibition of alcohol, were revealed as part of Surah Ma’idah:

"O you who believe! Intoxicants, gambling, idolatry and arrows (for seeking help on decision) one an abomination of order that you may be successful.
Shaytan seeks only to cast amongst you enmity and hatred by means of strong drink and gambling, and hinder you from the remembrance of Allah and from his worship, will you then not refrain? ”    (Surah Ma’idah 90)

Allah in his wisdom, firstly disclosed the evils in alcohol, then prohibited it at Salâh times and finally declared it absolutely HARAAM.

THE BENEFITS AND HARMS OF ALCOHOL

People generally are quite well acquainted with what benefits are attributed to alcohol, for instance enjoyment of temporary happiness, strength increase of a short time, colour becomes clearer, initially (as to some medical claim).

Compared to the few limited benefits of alcohol its risks and harms are so varied that, perhaps so many disadvantages may not be present in any other thing.

1. Through alcohol, the stomach gradually loses its ability to function properly.
2. Causes loss of appetite.
3. It spoils ones facial features (Appearance)
4. Makes one age quicker.
5. Weakens and reduces the ability to think and speak properly.
6. Causes heart failure
7. The progeny of alcohol are weaker.
8. Creates fights and enmity between people
9. Leads towards grave sins, often adultery and murder are the direct results of drinking.
10. Thousands of pounds are wasted in this vice