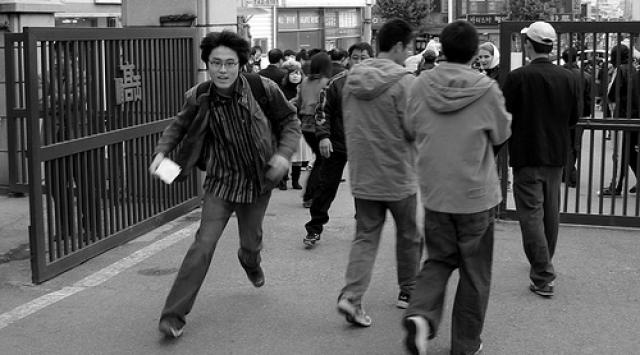 Recently, there has been a series of demonstrations that Korean college students have led against the increase in tuition fees. Presidents of college students’ associations got together and tried to hand the letter to President, Lee Myung Bak, directly. Some students have had their heads shaved. The rapid increase, 6.5-9% of tuition fees this time became the target of major criticism from young people. They also criticize the new education policies that the President attempts to start.

Cistory is one of the netizens who emphasizes setting up a better alternative rather than focusing on the amount of the tuition fee. His post starts with the title, “College tuition fee is not expensive at all.”

College tuition fee is not expensive at all.

People who went to college in the 1970s and 1980s would be familiar with the term, ‘Woo-gol-tap.’ Maybe not now anymore, but at that time university was regarded as an ivory-tower for learning. Of course, it is needless to mention that school was also a means for finding jobs at that time as well. Woo-gol-tap means a tower that was piled up by cow bones. In the country side, a cow was the biggest property of each household and the term meant to contribute the house cow to children’s college tuition fee. It means that the fee was that much for regular citizens.

At that time, 60 students studied in a classroom. Among them, 5-10 people were able to enter colleges. The average was about 15 percent. I remember the college tuition fee at that time was 200,000-400,000 won (200-400 US dollars) per semester. The amount was equal to a monthly salary for a breadwinner who works at companies with the highest 10 percent salaries. The current fee is 5 million won per semester. It means it is about a monthly salary for an employee in the late 40s or the middle 50s who work at 10 percent high salary companies.

The current problem is not just about the expensive tuition fee. In the past, the classes that were not able to go to college all go to college nowadays. There was a newspaper article showing that the number of high school graduates is less than the number of college freshmen. Of course, it is good that all people can get college education. But the current problem is how we can solve the problem of college tuition fee for students. Like European countries, the government can subsidize 70-80 percent tuition fee or support school expenses with low interest in the long term. Compared to other European countries, the amount of tuition fee per person is not that high.

Politicians should discuss how the issue of the tuition fee can be solved, not just comment that it is expensive. Many European countries treat the college tuition fee as national health insurance. Except several special private colleges, all students get benefits from the government. […]

The current president was elected with the absolute support of current college students, their parents, and relatives. But why do they blame politicians with one reason, the college tuition fee? Half price of tuition fee? Politicians always live with lies. Within this government term, we should appreciate it if the fee doesn’t go up two times more. As a matter of fact, if the quality of university education wants to be at the European level, two times more expensive tuition fee would be suitable in terms of our GDP. In order to let the National Assembly talk about the subsidy of the tuition fee from the government, the college students should pull themselves together.[…]

There are two interesting arguments about how the current college students and the 386 sede, who are in their thirties and forties, interpret this issue and political attitudes toward each other.

I saw the demonstration against the increase of the tuition fee of college students on the 28th. I support them. They must have broken out of their houses, not putting up with looking at their parents’pain due to the excessive tuition fee. I understand what they did, but why do I feel something is missing?

College was called an “ivory-tower of knowledge”before. Why was it called that? Have some university students thought about it? The school is not the place where they can ask for their own benefits and speak out for their own sake. Do they know about that? The experienced who went through college life at that time also had to suffer from the tuition fee. But those people stood up for democracy of this land and fought against the corruption. I understand the problem of the tuition fee they are talking about now. But I don’t know whether they have the qualification of speaking out. You, who should be the preliminary intellectuals in ivory-towers, chose Lee Myung Bak in the Presidential Election, only thinking of profits in your presence (creating jobs). In addition, you were silent about special investigations for Lee Myung Bak’s corruption and of the grand canal construction issue which even your professors were against.

And how about the special investigation of Samsung? Of course, you guys were quiet, considering your own benefits. I am not going to intervene into your choices. I’m not saying your struggle against the increase on the tuition fee is wrong. But you turned yourselves toward selfishness and benefits rather than justice, and chose the person who supported economic growth and half-tuition fee, and continually lied. Then now you say you’re deceived and are against the increase on tuition fee. I hate your attitude.

Don’t think about your own benefits. If you’re truthful intellectuals and eggheads, carry on. If you’re angry and sad, and you can see the truth, please take action. In the general election on the 9th of April, show your sincerity. Don’t think you’ll go for a picnic. Take action. That might be a more realistic method rather than walking on the street and shouting opposition to increasing the tuition fee. As you can see parents suffering from the high tuition fee, show you’re awake on the 9th of April. Don’t be tricked by the sweetness again…

I extracted a post that talks about how people in their twenties think about the 386 sede and their perspectives toward the current college students.

According to the content, it seems that the 386 sede (386 generations: indicating the generations who spent their college lives in the peak time of demonstrations against the authoritarian government in the 1980s) wrote it. Besides this writing, it’s easy to find writings from the 386 sede about criticizing the political indifference of people in their twenties. But when I see this kind of writing, I’m mad. I agree that those in their twenties are not interested in politics. But they’re not completely ignorant like the 30-40s think. Their point is this, ‘You’re ignorant of politics and chose Lee Myung Bak. And then why do you complain now? Do your best for the general election.’

But was Lee Myung Bak selected because of people in their twenties? According to the post, presidents of 42 college students’ associations announced the support for Lee Myung Bak. But most of them were vocational colleges in the countryside. Their characteristics are small numbers compared with universities and the activities of the students’ associations never influenced politics. Of course, there were several big universities[…] But it was the student presidents’ own opinions, not other students’ opinions.[…] Looking at the characteristics of the people in their twenties’ votes, the number supporting Lee Myung Bak is higher than the 30s, but lower than the 40-60s. Rather, the ratio that the 386 sede supports Lee Myung bak is more than 50 percent. And the votes of those in their twenties that support Moon Kook Hyun and Kwon Young Kil who were progressive and reformative were much higher than any other generations. Looking at this result, the 386 sede should apologize to those in their 20s.[…] Even though the 386 sede spent their college lives in the dark period of dictatorship, the university students at that time were at least regarded as the elite and had some previledges. But the current generation is forced to go to college not in order to be losers in society, but it doesn’t give a promise to be employed after the graduation. We have to worry about how to make living from the beginning of our campus lives.

People who still do citizen activities in their 40s say this a lot. If they start their own families, they have to take care of others. That moment is the hardest time whether they have to continue the activities or not. Of course, I understand the 386 sede who gave up the activities. I acknowledge they went through student activities really hard.

However, I hope that they understand what they were worried when they are in the 40s are what we have to worry as soon as we step in colleges. As soon as we enter college, it is the reality that we have to stick to prepare civil service examinations and other tests for obtaining jobs. This reality is not what we made. It is the burden that the previous generations passed to us.[…] I ask them politely not to call people in their twenties immature kids. We are adults who can think and judge. There are students who are indifferent about politics and the nation. There are friends who think about themselves. But those people can be found in the thirties and forties. To criticize those in their twenties as being indifferent about politics… If the criticism is way too much, it could rather make them be sick of politics.