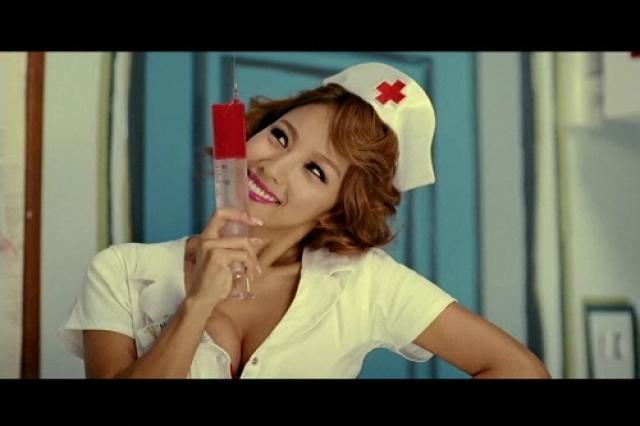 A recent music video of a popular and sexy female singer Lee Hyo-lee in Korea has been a hot issue. Maybe in other places as well as in Korea, the nurse costume has been sometimes used as a sex symbol and the singer used the concept for her new music video. After the preview of the music video came out in public, nurses have been strongly against the music video and try to break the social prejudice.

A nurse started a petition campaign on the Internet and expressed how the video can give the wrong message to society.

In Korea, the image of a nurse is always exposed in the media like this. Therefore, people keep looking down on nurses. Honestly speaking, in order to be a nurse, you have to study really hard and work hard. But the reality is that nurses are sexually harassed and have to put up with male patients’ pervasive glances. Even though I don’t want to, I regret the choice of my job. Why does TV portray nurses as servants of doctors? Why do sitcoms portray nurses as sexy and dumb? Why do music videos portray nurses sexually? Nursing is a professional job. Please treat us professionally.

An opposite opinion was suggested.

Whenever the nurse costume comes out in public, this kind of criticism always arises at the same time. Compared to doctors, nurses are not socially treated well and might be discriminated against. Of course, we need to change our perspectives… But isn’t there a sexual fantasy about female doctors as well? When we think about nurses, we think about women. When we think about doctors, we think about men. As usual, for men’s sexual fantasy, nurses and stewardesses have more chances to be imagined… not because we look down on them.If we can’t even use this kind of fantasy, what are we going to watch…? Peace, Buddhism or Christian TV? She (Lee Hyo-lee) is wearing an excessive nurse costume. So it gives the different concept from real nurses. If she wore a normal nurse outfit, it would be worse. Even though we see those kinds of sexual fantasy arts regarding nurses, we will not look down on them. Watching those nurses on TV, we will not think them as identical. Maybe being nurse is not an ideal job to everyone, but a trusty job.

In that way, nurses have a better situation than stewardesses. Through political correctness, instead of stewardesses and stewards, they try to switch to cabin attendants. But it has not worked well… I don’t know how to solve this problem. As long as the prejudice of people doesn’t disappear, people will not change..[…]

Since the signature-seeking campaign started and the music video has been seen by the public, many netizens have put their opinions.

Even if you watch this kind of video, people will not look at nurses with strange looks and mock nurses… as long as they are normal.

Other people might think that nurses over-react. Honestly speaking, when I didn’t belong to this field, I also didn’t care so much. However, please consider that if the job that you obtained with so much effort is portrayed in this way to all peoples. How would you feel?

I am sure that nurses will have hard time and be perplexed… We should also consider nurses’ circumstances.

I am a man whose girl friend works as a nurse. Every time there are news reports that we are short of nurses in Korean society. Despite that, nurses after having 4 year college degrees would like to go to America or other countries whenever they have chances. They are professional nurses, but they are treated as female employees who just do injections in town clinics and as the objects of sexual ideas. I know there is freedom of expression. Even if there is the freedom of expression, Lee Hyo-lee is not a minor singer and her music video will be shown to everyone. In that TV channel, if we show a professional as a sexual object, how will children think about nurses?