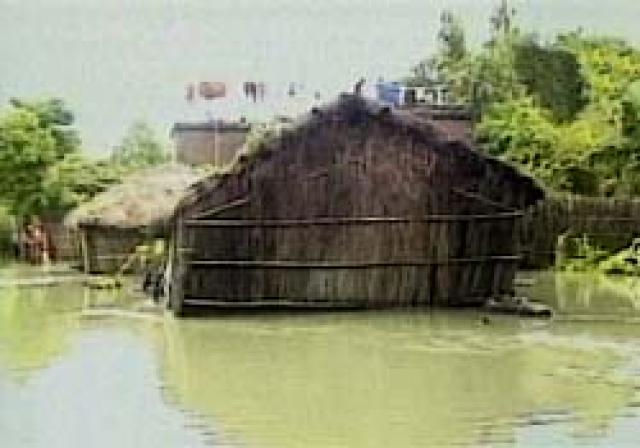 With over 20 lakh people bearing the brunt of floods in 14 districts of Bihar, three Indian Air Force helicopters continued to drop relief materials in the worst hit Supaul, Araria and Madhepura for the fifth successive day on Tuesday as the turbulent waters of the Kosi submerged fresh areas in the three districts.

So far, 42 people have died in the flood in Bihar, official sources said.

Three IAF choppers airdropped relief materials in the flood-ravaged villages of Supaul, Araria and Madhepura districts where more than 12 lakh people were hit by the flood caused by the breach in the east Kosi afflux embankment in Nepal on August 18, Chief Minister Nitish Kumar told reporters.

The problem has been compounded by the fact that the river, named the “Sorrow of Bihar,” has changed its course due to the breach that that widened to more than two km now, destroying standing crops and flattening houses coming on its way, he said.

Evacuating the people stranded on roads, embankments and other elevated places between the two streams of the river posed a major challenge to the flood fighting machinery of the state government.

According to official sources, the floods have so far claimed 42 lives with Muzaffarpur accounting for the largest number of 11 deaths, Madhepura (nine), Supaul (seven), Saharsa Katihar and Sitamarhi (four each), Khagaria (two) and Nalanda (one).

The flood has hit the state’s 14 districts – Saharsa, Muzaffarpur, Katihar, West Champaran, Patna, Nalanda, Khagaria, Sheikhpura, Purnia, Saran, Begusarai, Supaul, Araria and Madhepura – the last three were worst hit by the deluge, which the Chief Minister described as a “catastrophe.”

Nitish Kumar had on Monday transferred Sharif Alam and Garib Sahu, District Magistrates of Supaul and Saharsa respectively for not proving equal to the task of providing succour to the people and replaced them with N Shravan Kumar and R Lakshmanan. He also shifted Supaul SP Shyam Kumar and appointed Shahrukh Majid in his place.

Filed under: Media & Tech, World
Share Tweet Pin G Plus Email
previous article: Conversions in India – Myth or Fact
next article: What Is Wrong With Pakistan?