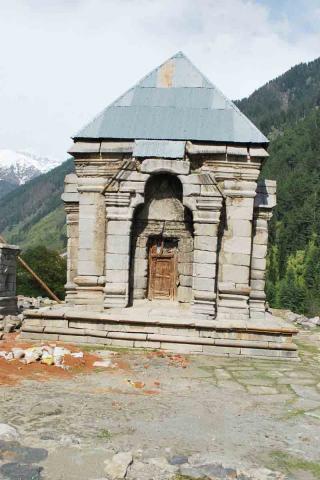 Srinagar, March 20 (Scoop News) – All Party Migrant Coordination Committee  has demanded a CBI probe into the encroachments of temple and shrine property and land of Kashmiri Pandits by the land mafia as well as involvement of  senior leaders  of Kashmiri Pandit community in to the Inquiry Commission as proposed by the government on the Floor of the House in Jammu Recently.

Addressing a press conference in today the members of Committee said that the government was not serious over the maintenance of Kashmiri Pandits shrines and temples adding the delay in tabling the Temples and Shrines Bill in the Assembly was an evidence of its non serious attitude over the issue.

They also demanded reopening of for KPs saying if trade between the POK and J&K can be facilitated why government was not pursuing the pilgrimage of KPs to Shaarda temple through LoC.

Expressing serious concern over delay in tabling the and Shrines bill in the Assembly has demanded involvement of senior leaders of Kashmiri Pandit Pandit community in the inquiry commission on temple encroachments in the Valley.

The members of Committee incuding Vinod Pandit, Manorama Bakshi, National Coordinator, Arun Kandroo, General Secretary and Ravinder Pandita, secretary also warned the government that without the involvement of KP leaders in the proposed inquiry commission into the encroachments of temples would be farce and rejected by Pandit community.

They said that the government has no data on the damage, encroachments and destruction of the temples in Valley which was evident from the fact that despite its RTI application some two months back the government was yet to respond to their demand of providing data.

They said that committee has written two letters to the Chief Secretary also in this regard but no response has been given to the RTI applications.

They alleged that the government was either in deep slumber or misleading the people over the actual position of the temples in the Valley.

They said that we demand of a white paper on temples and shrines of Kashmiri Pandits in Valley and the involvement of KP leaders in any sort of inquiry commission was a must to build confidence among Pandits regarding their religious properties in the valley.

Maintaining that 80% of temples, shrines and holy springs were damaged or encroached in Valley, they said that it was the pressure of land mafia in Valley that prevented the successive governments from tabling the Kashmiri Hindu Shrines and Religious Places (Management and Regulation Bill).

They said that the damaged number of temples across the valley was much higher than the admission of the government during the Assembly proceedings recently. He said that it is not only the temples but other allied religious properties of migrants which have either been damaged or encroached by land mafia in connivance with politicians and administration.

The committee members said either government was telling lies or it must accept that vandalisation of temples has reached to its peak during the last few months.