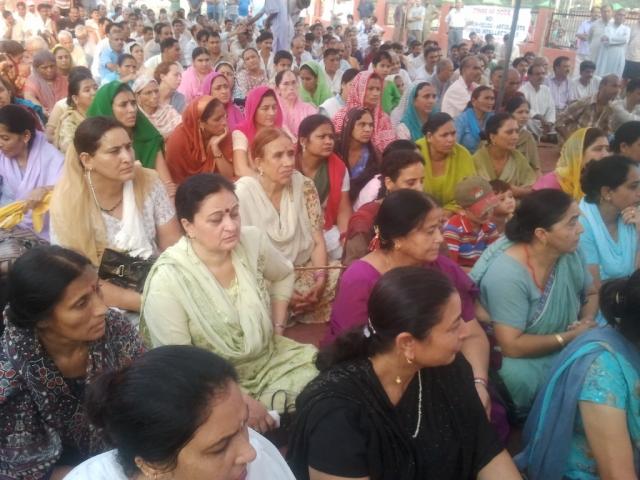 Several Kashmir Hindu organizations observed Balidan Diwas on September 14 at various places. Kashmiri Pandit Conference (KPC), National President, Kundan Kashmiri while paying tributes to martyrs who scarified their lives for territorial integration of the nation including Tika Lal Taploo, Prem Nath Bhat, Sarwanand Premi, Neel Kant Ganjoo, Lassa Kaul and several others, Kashmiri said that community would never forget the sacrifies of the patriots. He also paid rich tributes to those who lost their lives post ethnic cleansing at Jammu and other places in India.

Addressing gathering of uprooted members of community at Jagti, Kashmiri urged upon the government to refrain link employment with return policy. He also demanded that two youth, who were abducted by unknown elements, of community should be found on war footing to avoid distress among community members in Valley.  General Secretary P. N Pandita and State President Satish Pajnoo along with other leaders also paid rich tributes to martyrs on the occasion.

Dr. Agnishekhar put the community members on caution that the clap trap of govt. appointed interlocutors, advocates of autonomy, self rule or any other solution to the so called Kashmir problem in the back drop of granting amnesty and reprieve to killers and terrorists and plans for their rehabilitation, had nothing in their bosom to fit in any solution to the return of the exiled community to Kashmir and we reject ab-initio, all such proposals or impending solutions.

President Panun Kashmir Dr Ajay Chrungoo while paying tributes to martyrs threw light upon the exodus of Kashmiri Hindus and reminded community members that the noble sacrifices offered by the community persons will remain ever green in their minds. Others leaders of organization also paid rich tributes to the martyrs.