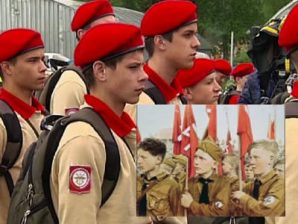 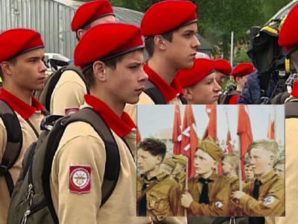 Serious miscalculations and image-building losses on international scene force Russian government to expand their propaganda actions to justify its military and isolation policy inside the country. Therefore they concentrated a great portion of propaganda over a so-called military and patriotic education of youth.

To achieve this they created children’s and youth military-patriotic movement “Yunarmia” (Young Army) upon the initiative of the Ministry of Defense and supported by President Putin. Its structure was developed by the Ministry of Defense and all its 76 branch offices are located strictly next to military bases, military educational institutions and other military structures all over Russia with its headquarter in Moscow. Children, ages 10 – 17, can become members of “Yunarmia”. Joining the “Yunarmia” they take a solemn oath to Russia and wear a uniform as in the real Army. “Yunarmia” crest described as a five-point star transferring into a half-face of an eagle.

Military authorities expect it to be the most numerous youth organization to build up patriotism.

It worth notice, that military aspect of such education is on the first place. Children are taught how to assemble assault rifles. Moreover they pass a beginners training with marching drill, weapons practice and tactical training. During one of the events Minister of Defense Sergey Shoygu ensured “Yunarmia” members that they would be able to train using real military equipment – “fly aircrafts and jump with parachute, drive out on battleships and submarines, and finally shoot everything except rockets”. “Yunarmia” had its first competitions within radiation, chemical and biological reconnaissance branches last year. Children participated in exhibition performance of parachute jumping, demonstrated their driving skills on quad bikes and weapon handling skills.

Government does its best to endorse and contribute to realization of children military education. They hope that an opportunity to train using real military equipment will awake interest to organization and thousands of teenagers will join the ranks of “Yunarmia”. It has already involved 40 000 persons. Russian media widely advertise the romance of military service and “bright future” of participation in “Yunarmia” with an ability of career grows within it.

But there’s also another project directly connected to “Yunarmia”. Its training camp at “Patriot” national park nearby Moscow opened in summer of 2015. Government provided a territory of 5 000 hectares in elite suburbs of Moscow for this training camp. This training camp will have everything to display real combat conditions: “frontline” with barricades, trench shelters, and tank-cuts along with a field kitchen, bath point and special demolisher classes. This large-scale project is believed to unite preliminary youth military training with available family vacation, sport and patriotic education. By that Russia develops passion for weapon, children’s willingness and readiness to fight protecting “Russian interests wherever it is needed” as stated by Russian Minister of Defense S.Shoygu. 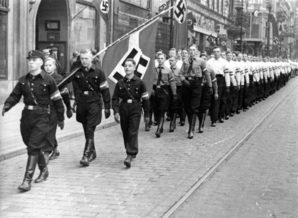 Yet another statement of Russian Minister of Defense was reacted sharply by European media. S.Shoygu declared that Ministry of Defense had intention to build a smaller copy of German Reichstag in “Patriot” national park for children to practice in building assault. He thinks that such activity can become additional motivation for children to succeed in military training allowing them “to assault particular building instead of something meaningless”.

Europe and especially Germany took Russian plans to provide military training by practicing in Reichstag assault and by such to create an image of an enemy of certain country – as a sign of decline in states relations. In this regard experts emphasize that such militarization of Russian society and especially children becomes really disturbing trend. German experts note that children assaulting Reichstag will associate this building with the one where current German parliament holds sessions.

This particular case is a clear example that modern Russian society is full of USSR stereotypes and children are educated by a negative image of West.

Filed under: News, Opinion
Share Tweet Pin G Plus Email
previous article: GroundReport Will Shut Down April 30, 2017
next article: Found on the dark side of the moon – common sense