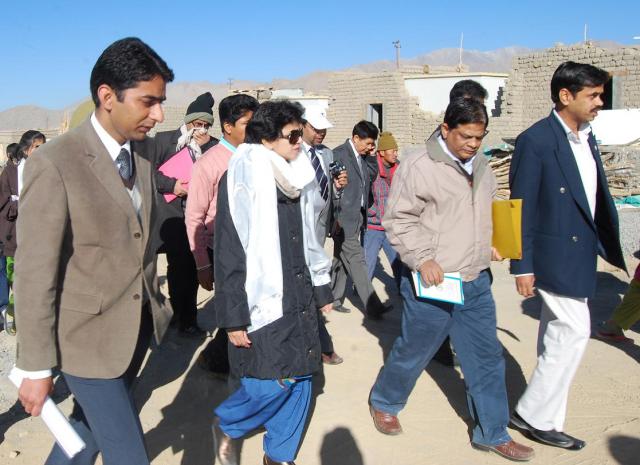 The Minister visited the site of reconstruction at Solar Colony, where the flash flood victims from most devastated area, Choglamsar, are being rehabilitated. The Hindustan Pre-Fab Limited (HPL), under Ministry of Housing and Urban Poverty Alleviation, has taken up construction of 450 one-room pre-fabricated tenements, out of which 170 are being constructed at the Solar Colony alone. The Minister expressed satisfaction over the pace of developmental works and reconstruction activities in Leh.

The Deputy Commissioner, Leh,  T Angchok informed the Minister that the families putting up in tents will be shifted to the newly constructed houses after another week’s time. Giving a resume of overall reconstruction activities, Dr Shahid Iqbal, Incharge Relief and Reconstruction, informed the central team that HPL has constructed 180 houses so far and work is in progress for another 194 houses, which is likely to be completed by November 20. He added that under Prime Minister’s Relief Fund, 196 houses have been fully constructed and work is under progress for remaining 269 houses and rest of the construction work would be completed next year. The National Mission on Bamboo Application has constructed 40 houses so far and 34 are under construction.

Principal Secretary, Planning and Development,  Khurshid Ahmed Ganai elaborated the measures taken by the State Government for providing livelihood to these affected families.  Ganai also stressed upon early shifting of affected families to new accommodation and also directed the administration to finalise the ex-gratia relief cases expeditiously. He asked the district administration to constitute a committee for declaring the missing persons as dead so that ex-gratia relief may be given to the next of Kin at an earliest.

Chief Executive Counsellor, Rigzin Spalbar requested the Union Minister for providing liberal funding to the sewerage system and solid waste management project for Leh town. The CEC also requested for the financial support for promotion of tourism so as to bring Ladakh on the international map. He added that people who have lost their commercial establishments and vehicles should also be compensated suitably as it was the sole livelihood source for them.