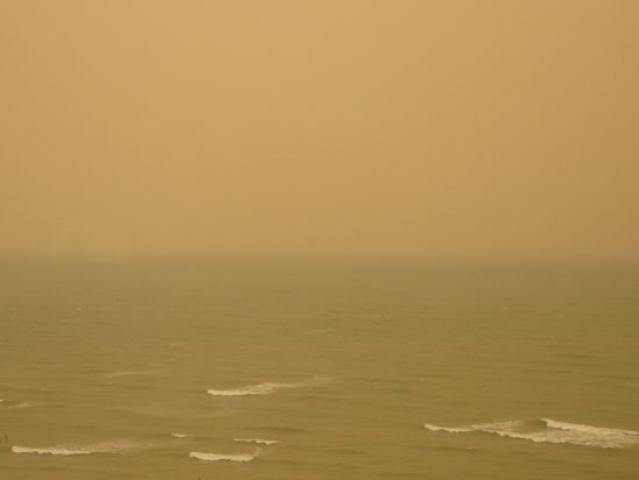 It’s already Summer in Kuwait, where temperatures peaked 42 degrees Celsius. But what’s also heating up in the race to the Parliamentary elections, scheduled for May 17.

The photo is not altered in any way. The orangey-yellow color is the real color of the sky. Totally weird. Big huge rolling waves coming in, good weekend to go shelling!

Q80 Saracen over at Kuwait The Panic Button explains how he thinks most Kuwaitis vote. He says:

For those few Kuwaitis out there who don’t know how they’re going to vote, there usually is a self-imposed criterion that one tries to follow. It differs from person to person, and the range that it stretches is in itself humorous.

Meanwhile, Kuwaiti bloggers have joined hands in a new blog which aims to provide an unbiased view and news on the elections.

A lot of candidates come and present one election agenda after the other.

One says that he will make Kuwait the best, another will fight for freedom and a third will defend Islam.

But the question we should be asking is: “At what price ?”
When you enter the elections and spend over KD30,000 (there are other sources put this figure in millions), isn’t it our duty to ask why is this candidate ready to spend all that money ?

For example, in the US elections Obama spent over $5 million for TV advertisement in one of the states, but hold on, that money wasn’t Obama’s money. It was donations from people who believe that he is the man for the job.

What is the return that the candidate expects when he spends thousands on his campaign ? And if he is keen on ensuring Kuwait’s interest and he has extra cash lying around, why doesn’t he donate it for a project to help Kuwait better than just talk ?

EXzombie, also at 5-q8, talks about the role bloggers will play in the elections and writes:

In the light of the Press and advertising embargo imposed on the candidates, modern mass communications have become important to garner the votes of the largest number of constituents. This is why a number of candidates are relying on the easiest and fastest growing used by youth and that is blogs. Bloggers will now come under the radar after the media and community’s realisation of their role and importance at such critical times in the lives of candidates. This is why everyone is hoping that the bloggers will fulfil what they want and recruit enough voters to guarantee them a seat in parliament. Although a few candidates have started their own satellite channels, which are solely dedicated to promote certain candidates and their agendas, I expect blogging to be the moving force in promoting candidates and their election programmes among a large segment of society, including youth and elderly people. In addition, a number of bloggers have been invited to take part in those channels as presenters and correspondents, and 5-q8 has noted that a few of them have indeed accepted positions.

It is also worth noting that candidates are using new ways to make use of the potential of bloggers in innovative ways, like third district’s candidate Muhammed Al-Munaifi, who will be sponsoring live debates with bloggers. Some candidates are now pressuring their relatives who blog to be their correspondents in the blogosphere, making way for blogs to cover every aspect of the election race from registering, their seminars, visits and even statements.

And while we’re on the topic of the elections, Bint Alshamiya wrote this beautiful article in her blog about the right of women to vote – and make up their own minds.

Dear Woman … Based on my observations during the last elections, I noticed that most women, young and old, based their vote on outside influences and not their own decisions.
I used to excuse old women and those with modest education for doing that but my biggest shock came from highly educated women, who blindly selected candidates based on their sects, family choice and class. They were herded to the voting booths without knowing anything about the candidate other than his name and the way he looked. As for his politics and thoughts, they knew nothing!!!   Have you forgotten Kuwait ?
Where are your feelings toward it ?
Just because her brother, or cousin, or brother-in-law, or father or brother told her they know him better than her (doesn’t mean she has to vote for him).
This is the greatest disaster.
My voting sister, if you want your freedom and if you want to champion for all your future causes, overcome those in your home. Let your choice be free without pressure from anyone, and built on your own convictions.
No one has a view that vetos yours – not a father, husband, brother, etc.
And no one can impose his political views on you – even from the inside.
Young women have the bigger role to stand with their mothers.
Kuwait is a trust in your hands and your votes are a responsibility.

Filed under: Politics, World
Share Tweet Pin G Plus Email
previous article: Korea: Conflicts between Koreans in their 20s and in their 30-40s
next article: Colombia: Bloggers Gathering Signatures for Copyright and Industrial Property Letter