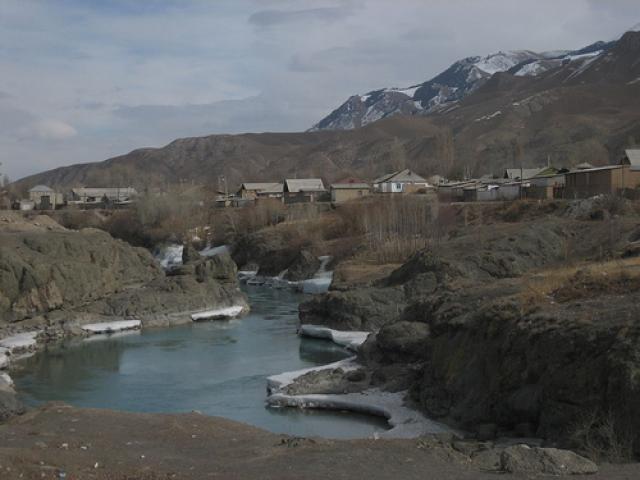 Critics highlight flaws in major project to provide drinking water in rural areas, but public reluctance to pay for upkeep is part of the problem.

By Elina Karakulova in Bishkek

A shortage of clean drinking water in Kyrgyzstan has been tackled with multimillion dollar funding in recent years, but critics say the results have at best been mixed.

Much of the blame has been directed at the international donors who paid for a major programme to expand and repair water networks in the countryside. But an expert working on the Taza Suu or Clean Water programme said that most of the management problems had been fixed, and the big obstacle now was people’s reluctance to pay a small amount towards upkeep, so their supply system was liable to break down.

The government’s hygiene and disease department says at least 600,000 people out of a total population of five million have no access to clean drinking water, leading to a high incidence of diseases such as typhus and other gastric illnesses. Unofficial estimates put the figure much higher at close to half the population, overwhelmingly in rural areas where nine out of ten villagers do not have access to clean, properly treated water.

“The drinking water supply is satisfactory only in Bishkek,” said Ularbek Mateev, an expert on water and energy issues. “Outside the capital and in remote villages, people drink water right from the aryks.”

“Aryks” are traditional channels used for irrigation in Central Asia.

Provision has deteriorated in the 17 years since the Soviet Union broke up due to a lack of investment by Kyrgyzstan’s cash-strapped government. In places where a mains water supply exists, the infrastructure has often deteriorated to an alarming extent, and there were also many areas that were never connected up in the first place.

For example, people in Karakol, a town in northeastern Kyrgyzstan, have running water but cannot use it until they have allowed the clay and sand to settle and then boiled the water. In the southern town of Mailuusuu, people without a mains supply are at risk from subsoil water contaminated by radioactive waste from defunct uranium mines.

Paradoxically, while arid, low-lying Central Asian states like Uzbekistan and Turkmenistan face a perennial shortage of water, mountainous Kyrgyzstan has –in theory at least – an inexhaustible supply, with massive glaciers and countless rivers.

In 2001, the Kyrgyz government, in conjunction with foreign donors, launched two big projects to improve access to clean water with the common title Taza Suu (Clean Water). The Asian Development Bank, ADB, was the major funder of one of these projects, providing 36 million of the 45 million US dollar cost, to improve rural water infrastructure in four regions of Kyrgyzstan, while the World Bank and Britain’s Department for International Development provided 31 million dollars for the Rural Water Supply and Sanitation Project, covering the remaining three regions.

After some delay, both projects are due to end by the end of this year.

Both segments of the Taza Suu programme have had to lower their expectations, and the ADB-run project in particular has faced criticism from a local pressure group for the way it was run. Officials at the bank say significant concerns have already been addressed and other teething problems are being dealt with along the way.

Although the initial plan was to supply about 1,000 villages with clean water under the two projects, this has had to be scaled back to half that number. According to Nurmamat Mulakeldiev, who heads the water supply department at the Kyrgyz agriculture ministry, this is because the rising cost of fuel and construction materials means the donor funding no longer stretches as far.

Mulakeldiev’s department says just under a third of the approximately 1,700 villages in need of clean water have now been provided for, but there are about 1,200 left. Some of the remaining work will be covered by a second phase of both projects for which donors have allocated about 30 million dollars.

“Villages where sanitation is particularly and there is typhoid fever and other diseases caused by low-quality water will take part in the second tranche. They will be given priority,” said Mulakeldiev.

The ADB-funded project covering Chui region in the north as well as the whole of the south – Osh, Jalalabad and Batken – has come in for fierce criticism from a non-government organisations led by the Taza Tabigat (Clean Nature) group.

Taza Tabigat monitored the way the project was implemented and says it found a string of blunders as well as outright abuses.

“Many villagers in the settlements covered by the project had to collect rainwater and carry water in buckets,” Taza Tabigat’s head Anara Dautalieva told IWPR. “Poor-standard, obsolete chlorination plants and toxic asbestos pipes forbidden by the international donors’ documentation were used within the project.”

In addition, she said, villagers were unaware of the nature of the project funding – while the bulk of it was covered by a loan taken out by central government, five per cent of the costs had to be found by the local community that benefited from works in their area.

“When we told people how much their villages had to pay, they were surprised they had to pay for water of this quality,” said Dautalieva.

Dauletalieva says pressure from her group led the ADB to agree to conduct an investigation into allegations of fraud and corruption in the water project, and to restructure the financing to ensure the work was completed, and where necessary, re-do work that had already done.

The ADB has not confirmed that an investigation is planned. Its Kyrgyzstan country director Lan Wu has said the bank is to spend an extra four million dollars on sorting out problems.

Cholpon Mambetova, an project implementation officer with the ADB’s Community-Based Infrastructure Services project, accepted that some of the installation of water infrastructure had been poorly executed and monitoring of the work had been inadequate. She attributed this to management issues in past years, but these had been addressed.

She referred to the criminal cases launched against local contractors for Taza Suu following the ousting of President Askar Akaev in 2005. No senior government official has been prosecuted.

“The old team [in the agriculture ministry] performed poorly in that there were cases which prosecutors are now looking at, involving financial irregularity and allegations of corruption. The problem is that no one’s been punished –that’s our flawed judicial system – but all the facts were uncovered and the individuals concerned were identified, if not punished,” she told IWPR.

“All these errors and miscalculations occurred under the previous team. But there is a new team that’s now in its second year of work and is cooperating with us to try to resolve problems where these have arisen.”

Overall, said Mambetova, the project had been a success.

“Fortunately, it’s only in a small number of villages that the money wasn’t used as it should have been, and we are now correcting the situation in these sub-projects,” she said. “In most villages, the project has been very successful – there is water, residents are satisfied.”

Persuading rural communities to pay for the upkeep of the water network was a real headache, she said.

“We come along and repair the system and hand it over, but people are unaccustomed to paying for it, so they’re unwilling to do so and don’t pay. Two years later, the system breaks down again and they blame the ADB and the government. People refuse to understand that repairs have got to be paid for – this isn’t Soviet times, when everything was laid on for free.”

Mambetova argued that this failure by villages to maintain networks installed with ADB funding several years ago was often the real reason why problems had arisen and people were now complaining about the quality of work done under the Taza Suu project.

She pointed out that the five soms a month – around 14 US cents per person – that villagers were being asked to pay for maintenance was hardly exorbitant. “A bottle of vodka costs 40 soms, and male head of households often take that kind of money and drink it every day,” she said.

It was crucial to get communities to think about looking after their own water systems. “The question of public participation, whether people are ready to take responsibility for maintaining these systems is a very serious one,” she said.

The government official overseeing the implementation of the project, Mulakeldiev, took a similar line, saying that water supply problems had been identified in only nine of the 500 villages that came under the Taza Suu project, and most of these problems were caused by people’s refusal to pay for the upkeep.

“Any system is going to break down if it isn’t repaired,” he said.

Elina Karakulova is IWPR’s chief editor for Reporting Central Asia, based in Bishkek.