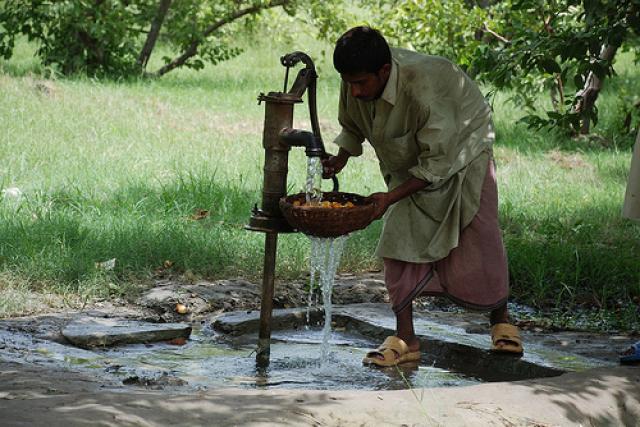 On Thursday morning when my next door neighbor Muhammad Farooq Khan Naib Nazim Khushahl Garh extended an invitation regarding a visit to Dhok Qasaba to condole the death of  young niece of Nazim Khushahal Garh Mr. Zafar Malik, I accepted his invitation and soon we both were on our way towards village Dhok Qasaba, located on Kohat Pindi road at the bank of river Indus.

After a half an hour journey by car we both were sitting in the guest room of Malik Zafar where village people were also gathered to console the death of his young niece, we all prayed for the blessing of her departed soul. And then village elders started complaining about their failing health, most of the elders in Dhok Qasaba were suffering from knee problems, and only a few among them were getting treatment from quacks, I told them to contact MBBS doctors for treatment, they agreed but were complaining regarding high prices of medicines.

I found a good deal of mud in a glass of water which was placed before me, I refrained myself from drinking it. Then a cup of tea was brought and I took it reluctantly, when I enquired about the muddy water, Nazim Khushahl Garh told me every one in Dhok Qasaba is drinking the same water, it is extracted from the well by hand pump. When I told him about the use of a filter to drink water, a villager sitting in the guest room innocently suggested to ask President Parvez Musharaf to build Kala Bagh Dam.

I promised him I would write about it and if the President took notice of it, it would be constructed soon. On the way back from Dhok Qasaba towards Nak Bund village, Mr. Malik Numberdar of the Nakbund village told me, that  pure honey is not available in the market, thus sellers are mixing water in the milk at the ratio of one bucket of water per bucket of milk.

After this long day, I came back home to write about the tale of muddy water which people of Dhok Qasaba have been drinking for centuries. While the country has modernized, the muddy water is still common in Dhok Qasaba and in hundreds of villages and towns of Pakistan.