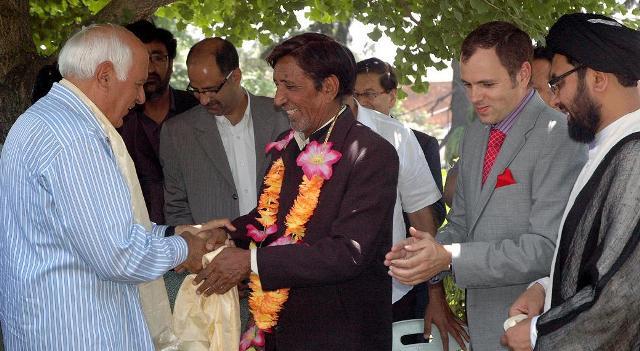 MP-elect, Leh-Kargil Parliamentary constituency, Ghulam Hassan Kahn who fought the elections as an independent candidate, today joined the National Conference. He announced his decision at a crowded press conference in the presence of National Conference President, Dr. Farooq Abdullah at on Monday.

Welcoming Khan’s return to NC, Dr. Farooq Abdullah described it home coming of Ghulam Hassan Khan. He expressed the hope that Mr. Khan would work with NC-Congress coalition partners for the welfare and development of whole of Ladakh region. He said that Mr. Khan will also work for strengthening the communal amity between Buddhist and Muslims in the region and advocate their demands and difficulties at all relevant forums.

Dr. Abdullah said that in Khan’s joining NC has the approval of Congress high command and expressed hope that this would prove beneficial for the people of Leh and Kargil who require focus of attention in the development process.

The NC President also hoped that government under the stewardship of young Chief Minister, Mr. Omar Abdullah would pay special attention for the overall development of Leh and Kargil districts, saying that the region requires priority attention for faster development.

The press conference was also addressed by Mr. Khan who explained the spirit behind his fighting as independent candidate from Leh-Kargil constituency said that it was actually on the demand of people that he fought the elections. “They asked me to come forward and represent them and I worked accordingly”. He also said that his joining back to National Conference was his homecoming.

The press conference was also addressed by the , Kargil Sheikh Ahmad Mohammadi. He highlighted the problems of people of Leh and Kargil and expressed confidence that State and the Central government would take measures for redressal of all the grievances of the people of this region. He said Mr. Khan enjoys the support of both Muslims and Buddhists equally adding that the amity between all the sections of the society would be strengthened and cemented.