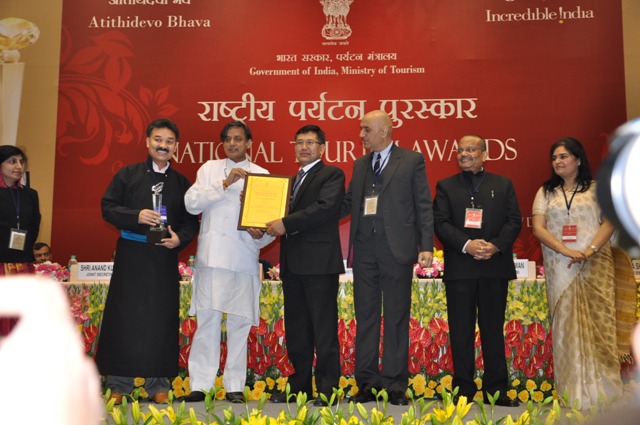 New Delhi/Leh, February 18, (Scoop News) -Ladakh received “Best Responsible Tourism Project” Award at the National Tourism Awards 2012-2013, held at the Vigyan Bhavan, New Delhi on Tuesday and was facilitated by the Ministry of Tourism, Government of India. The event was organized to acknowledge the excellence of various states of India, hotel groups, airports and tour operators from across the nation in providing exceptional hospitality services during the year 2012-2013 and aiding to the growth of the tourism industry in the nation. At the august gathering comprising of ministers from various states, secretaries to the Government of India and executive directors of various tourism organization and companies, Leh-Ladakh was conferred the award for the carrying out the “Best Responsible Tourism Project,” especially to appreciate the large efforts put in by the Leh District to execute eco-tourism projects.

The award was received by Rigzin Spalbar, Chief Executive Councillor, LAHDC-Leh and Jigmet Takpa, Chief Conservator, J&K Department of Wildlife Protection from the chief guest, Shashi Tharoor, Union Minister for Human Resource Development. Rigzin Spalbar conveyed his appreciation to the Government of India for the special recognition to Ladakhis for promoting responsible tourism and added that the growth of tourism in Leh-Ladakh will always put conservation and poverty alleviation issues as a priority while pursuing to make Ladakh a world-class tourist destination. He also made reference to the “Ladakh Vision Document 2025” to point out how Leh-Ladakh is striving to make the region an outstanding example for mountain development and tourism.

The Ladakh Ecotourism Initiative, implemented in the Ladakh region by the Department of Wildlife Protection, J&K aims at increasing sustainability through maximizing local benefits to strengthen linkages between conservation and livelihood security of local communities. These goals have been achieved through expansion of participatory management models across the broad landscape of Ladakh. The initiative includes programs that minimize the negative aspects of conventional tourism on the environment, and enhance the cultural integrity of local people. An integral part of ecotourism in Ladakh has been the promotion of recycling, renewable energy, energy efficiency, water conservation, and creation of economic opportunities for the local communities. Today, Ladakh has seen to a rapid growth in sustainable tourism with over 700 homestays created throughout the entire Ladakh landscape, extensive camping and waste management programmes and the training of hundreds of nature and field guides. The use of renewable energy for local communities has also been extensive in the region.