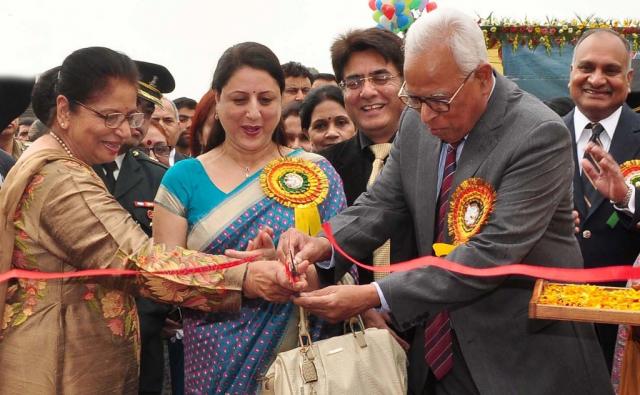 Jammu, (Scoop News) –   Usha Vohra, First Lady, inaugurated the day-long Jammu and Kashmir Police-Public Mela in the presence of  N. N. Vohra, Governor, who was Chief Guest at the inaugural ceremony, amidst enthusiasm and fanfare, at the Police Sports Stadium, Gulshan Ground, here this morning.

Dr. Indu Koul Khoda, Chairperson, Police Wives Welfare Association, lady members of the Association and  Kuldeep Khoda, Director General of Police, were prominent among those present on the occasion.

The First Lady lit the ceremonial lamp to mark the commencement of the Mela. The students presented a welcome song on the occasion.

Later, the Governor and the Lady Governor, along with the Director General of Police, the Chairperson, Jammu and Kashmir Police Wives Welfare Association, and senior Police officers went around 40 stalls put up in the Mela and evinced keen interest in the items on display, particularly the handicrafts products from Ladakh, Kashmir and Jammu regions which are on sale. The Governor and the First Lady interacted with the stall holders and enquired about the various items put up for sale. They also witnessed a composite cultural programme based on folk songs and dances of the three regions of the State.

The Governor and the First Lady also inspected the Raffle Draw prizes displayed on the occasion.

The Governor and the Lady Governor were briefed by  Khoda and Dr. Indu Koul Khoda about the aims and objects of the Mela and, besides, the activities of the organization aimed at securing the welfare of Police Parivar, with special emphasis on the next of kin of Police martyrs.  Khoda gave details about the recent enhancements made by the Police organization in regard to various welfare measures. The Governor and Mrs. Vohra appreciated the Association’s initiatives, aimed at securing the larger welfare of Police personnel and their families.

The Mela was attended by a large number of people from all walks of life. They showed great enthusiasm in purchasing goods kept for sale at the stalls, food of various kinds and witnessed varied cultural presentations.