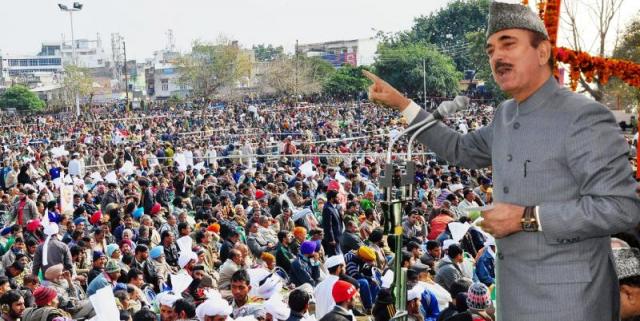 Gandhi Ji  as the most glorious leader of present times:Azad

Jammu, January 30 (Scoop News) – Lakhs of people  assembled on the inaugural session of two day long function organized by the Gandhi Global family on the martyr’s day of Mahatma Gandhi at Parade Grounds, in Jammu today. Union Minister for Health and Family Welfare and President GGF, Ghulam Nabi Azad was the Chief Guest . Speaking on the occasion Ghulam Nabi Azad described the Father of the Nation Mahatma Gandhi as the most glorious leader of present times. He said that Gandhian philosophy has crossed all the geographical precincts and has more relevance even  in the modern world. He described Gandhi ji as a beacon light of hope for the world struggling with violence and forces of vehemence.

While remembering the sacrifices Gandhiji made for the Nation, the Union Health Minister said sacrifice is one of the most pious feelings of human nature and Gandhji was an epitome of sacrifice. Today is the day of sacrifice and a day to commit ourselves for the cause of Nation, he added.

“We all have assembled here today to pay homage to the Father of Nation and salute him for the supreme sacrifices he made for the country,” he said.

“Secular string binds the country together and today when all over the world wars are being fought on religious and fundamental grounds, is spreading the message of peace and non-violence, as taught by Gandhiji,” he noted.

The Union Health Minister said that present UPA government under the chairmanship of Madam Sonia Gandhi and Prime Minister Dr. Manmohan Singh has started various schemes to uplift status of Indian villages. The schemes cover the areas of employment, health, education, road connectivity. All these schemes have been started to carry forward the agenda of equipping villages of the country on modern lines and uplifting their status, he added.

Azad quoted Gandhi ji “Hindustan doesn’t live in or but real is in its 7000 villages.”

Remembering the befitting tribute President  Barack Obama paid to Gandhi ji while addressing the joint Parliament session in , the Union Minister said  Obama termed ideology of Mahatma Gandhi as the reason for him being elected as the president.

Speaking on the occasion, the Deputy Chief Minister said Gandhiji is remembered as a champion of peace and non-violence not only in the Nation but all over the world. He said Mahatma Gandhi led the war of freedom against the and freed the country from the clutches of foreign rule.

Tara Chand said Gandhi ji dreamt of a free country with laws which give similar treatment to all its citizens irrespective of religion, caste and creed, adding that the constitution drafters have carried forward the agenda set by Mahatmaji.

He said under the able chairmanship of Dr. B.R.Ambedkar, the constitution framing body gave the nation an excellent piece of Law, which gave equality to all its citizens and universal franchise; thus enabling people to elect their leaders.

“By following the path shown by father of is today recognized as one of the strongest and a secular Nation,” he added.

He said number of bold development initiatives were taken and the state got new Universities, Degree colleges and schools. Besides this, work on Mugal road was started and the same would be thrown open to public very soon, he added.

He said present coalition government headed by Chief Minister  Omar Abdullah has taken forward all the development projects which were started by the predecessor. The state government is committed to uplift the socio-economic profile of all the three regions of the state and work on the road map to make the state a model state has already started, he added.

Recalling various contributions of  Ghulam Nabi Azad as Union Minister of Health, the Deputy Chief Minister said the state has high hopes that the health sector will be further strengthened. He said work on two AIIMS pattern hospitals is in final stages of its completion and soon people of the state would be getting world class medical treatments.

Remembering Father of Nation,  Arvinder S Micky spoke at length on the mission and message of Gandhi ji. He said Mahatma ji dedicated his life for peace and brotherhood and was above politics. His ideology is for all human race to follow and cannot be caged in one compartment.

Minister for Tourism and Culture,  Nawang Rigzin Jora while speaking on the occasion said that the day is to salute the great leader of Nation and pledge the commitment to follow the path shown by him. He said the message of non-violence, peace and brotherhood is having a universal approach and the same is more relevant in present times.

While addressing the gathering, Member Parliament Ch. Lal Singh said day should be celebrated by spreading the message all across the Nation and world and pledge should be taken to follow the path shown by Mahatma Gandhi. He said commitment of the government to strengthen Panchayati Raj institutions is a step forward in adopting the policies of Gandhiji.

On the occasion Padma awardees were honored which include  M.Y.Taing and  Nilambar Dev Sharma

Earlier, in a simple and impressive function  Ghulam Nabi Azad paid floral tributes to the Father of the Nation at Mubarak Mandi.

Azad along with Members of Gandhi Global Family, students, members of civil society, social and political activists observed two minute silence exactly at 11 am, the time of Martyrdom of Bapu Ji.