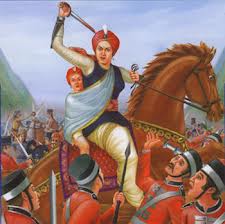 The British had a clever way of acquiring new territories for their empire known as Doctrine of Lapse. That’s what they used now. If an Indian ruler died without a natural heir, the British simply took over his or her kingdom.
Lakshmi Bai said to the officer who came with Dalhosie’s orders, `I will not give up Jhansi’. But in her heart she knew it was not use. In the morning she and Damodar left fort and went to live in a palace in the town. The British began to govern Jhansi.
In the palace, Lakshmi Bai led a quiet life. She visited the temple regularly. She taught Damodar to fence and ride, read and write. At the same time, she did not stop writing to the British for justice.
By 1857, the British had occupied a large portion of India and a majority of soldiers in the British army were Indians. Many of these soldiers were not happy because they were given new cartridges to use in their rifles. These were greased with fat from pigs and beef to help the bullet fire more smoothly from the rifle. They felt that by using these cartridges they were going against their religious beliefs. Though there were a lot of other problems, this was the worst.
The British appealed to Lakshmi Bai to talk to the soldiers and ask them to return quietly to their camps. Lakshmi Bai agreed but she could not discourage rebels because she believed in freedom. It was at this time that some neighbouring rulers tried to attack Janshi Lakashmi Bai gathered her army and stopped the attackers from advancing. Seeing this, the British accused Lakshmi Bai of preparing to fight against them. Lakshmi Bai took this opportunity and decided to join the rebellion her war for independence had begun.

Filed under: Lifestyle, Love
Share Tweet Pin G Plus Email
previous article: DMCRPT reconstituted its committees to give a more professional edge
next article: US Fed Chairman :Summers has upper hand than Yellen