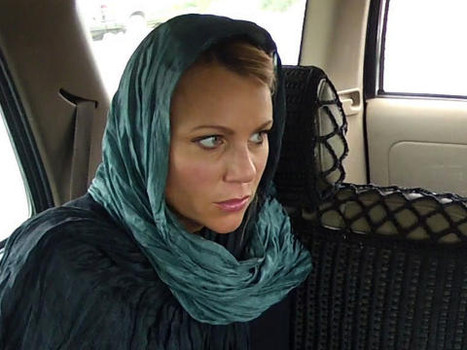 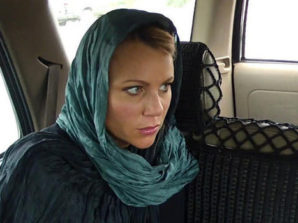 Lara Logan wearing make up in the back seat of a car with a high level Taliban leader?

By far it was one of the strangest interview I ever seen.

Lara Logan of CBS 60 minutes fame conducting an interview in 2012 with a high level Taliban commander and so called expert in “suicide bombings” in the back seat of a moving automobile, wearing make up of all things?

The Taliban are known internationally for their brutal repression of women. Make up is strictly forbidden, they have even been known to kill for less. Yet here she is wearing it?

The Taliban also require women to wear the burqa, a traditional dress covering the entire body except for a small screen to see out of. Instead Lara Logan was dressed conservatively with a silk head scarf to cover her beautiful hair. She was also wearing lipstick, a big “no-no.” She also had on a little eye makeup on, also strictly forbidden by the Taliban. I’m not sure if she was interviewing the man or trying to seduce him?

It seemed also, at times that Lara Logan made the Taliban commander a little nervous, after all he has a reputation to protect.

Logan asked the commander pointed questions about who was responsible for numerous insider attacks recently and he responded by saying “these are Taliban attacks”, as he shifted nervously around in his seat.

Part of what he called a new “military strategy”, as he stroked his beard.

“We have our people inside the Afghan police and the army”, he said. Adding “and the orders come from the top.”

The Taliban commander went on to explain that al-Qaeda are rushing to Afghanistan and that he had more than “a dozen of them under his command.”

“They are the driving force in making the Taliban more lethal on the battlefield”, the commander said gleefully. Perhaps hoping to impress Logan?

He indicated that other Taliban have al-Qaeda assigned to them as well. A fact now confirmed by this pudgy top level commander.

“They (al-Qaeda) are masters at everything, for example making IED’s (Improvised Explosive Device). This is something we just don’t know how to do. But they are teaching us, but they are also master engineers and good with all weapons. When are weapons break, they are the ones to repair them. We can’t do this without them”, he said (see article and video link: Taliban and al Qaeda working together in Afghanistan http://www.cbsnews.com/8301-505263_162-57523314/taliban-and-al-qaeda-working-together-in-afghanistan/ ).