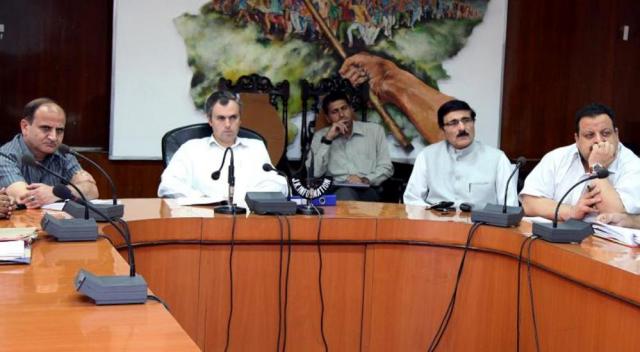 Srinagar/Jammu, September 7 (Scoop News) –While underscoring the dire need to provide shelter and housing facilities to the common people, the Chief Minister,  Omar Abdullah said that housing department should gear up its activities and take immediate steps to acquire and development the land at different identified locations so that large plots are developed and flats constructed and provided to the people on concessional rates. He said that and cities have become too congested and in one small house various families are dumped as a result of non-availability of cheaper land in and around cities. He directed housing board to construct large number of flats and develop plots for distributions among deserving people on priority basis on concessional rates.

The high level committee was constituted under the chairmanship of Principal Secretary, Planning and Development,  Khurshid Ahmad Ganaie to finalize the acquisition of land.

The Managing Director Housing Board made a presentation of the achievements, proposals and future plans of the board.

The meeting was informed that the board has developed 14 colonies and distributed over 8700 plots to the deserving people. It was also told that the board is developing low cost colonies in and for weaker sections of the society. Similarly, the plots of various sizes are being developed for distribution among the people on concessional rates.

It was also informed that at Rakh-Arth, Bemina 11000 plots have already been developed for Dal dwellers by LAWDA and 500 to 600 plots have been developed by Housing Board. The board proposes to construct dwelling units on cheaper rates. As per survey, 7.78 lakh people are living in slum like conditions and 22.7% house hold live in one room tenements. Similarly, 26.2% and 18.7% live in two and three room tenements respectively.

The Chief Minister said that keeping in view the survey report, it becomes necessary that State Government should work on war footing basis to de-congest the slum areas and create a vast land bank for providing liberal accommodation to the people who do not have separate dwell units. He said that in order to mitigate the sufferings of people on account of dwelling units, the housing board should accelerate its endeavours to acquire the land wherever it is available.

The Chief Minister directed the committee members to visit all the identified locations forthwith and prepare all the feasibility reports and expedite all procedures in this behalf. He urged them to keep all the plots and dwelling units ready within shortest possible time.

The Chief Minister was informed that in Mujgund, Alesteng and Shuhama thousands of kanals have been identified by the board for the purpose. At Tulbul Sopore, 8000 to 9000 kanals, at Kishtwar 201 kanals, at Batalballian-Udhampur 5000 kanals, Reasi 51 kanals, Samba 100 kanals, Charanbari Brahamna 2000 kanals, Kathua 674 kanals, Eidgah 500 kanals, Kanipora 500 kanals, Humhama 40 kanals, Bantalab 200 kanals, Kotbalwal 100 kanals and Bemina 1000 have been identified for developing as colonies and construction of flats. Similarly, at Gandhinagar-Jammu, Budgam and Channi Himmat, G+3 flats will be constructed by the board. The board has also a proposal for constructing a commercial complex at Nowshera-Srinagar over 7 kanals of land.

The Deputy Chief Minister,  Tara Chand assured the Chief Minister that his department will work round the clock for completing all the projects for providing succour to the persons in need. He said he has mobilized the men and machinery for the purpose.

Minister for Revenue and Rehabilitation,  Raman Bhalla informed the meeting that in Jammu city, if some trivial infrastructure is shifted, the Government will be able to acquire hundreds of kanals of land at prime locations which can be utilized for flats and dwelling units.