CHITRAL:   Awami National Party (ANP) provincial vice president Javed Yousafzai and provincial joint secretary Nisar Khan attended a public meeting of party workers regarding new organizing of the party. In this regard a public meeting was held of party workers in a local hotel. As the district office bearers had resigned from the party and workers had nominated 10 new members cabinet of party for Chitral.

Hence Iftikhar Jan and Imtiaz Jan who interferences and created tension on these nomination. they opposed of them and warned for remaining the old office bearers. Hence Javed Yousafzai while addressing to the party workers said that these 10 persons were nominated and pointed out by party workers who will be selected for one year hence after criticism of Jan brothers now it will be decided by provincial leadership. And after the decision of provincial president no body will be allow to oppose his decision otherwise it will be termed as conspiracy against the party.

Addressing on the occasion Aljah Eidul Hussain termed it a conspiracy against the party to fail them. He said that the former district cabinet badly failed to elect any MPA, MNA even a Nazim or councilor of union council that show their weakness. Now according to democratic way after proper counseling with party workers new office bearers were nominated for strengthening of  the party but Jan brothers want to fail once again the party and they want their monopoly on the party which is against the democracy.

A large number of party workers stand as protest and raised their hands on hands show in favor of Eidul Hussain and warned that if he was not elected as  president they will abandoned the party.

Another public meeting was held at Khurkushandeh village where a large number of people joined ANP from other parties. Haji Javed, Nisar Khan, Muzafar Jan, Eidul Hussain and other leaders put party caps on their head who joined ANP. Talking to public gathering Alhaj Eidul Hussain said that ANP leadership and their Chief Minister Amir Haider Hoti spend billion of rupees on different developmental plans and schemes at Chitral despite that there is no elected MPA, MNA or even a councilor from this party. He said that we just to thank them and to return their beneficial to them as they did more for Chitral as comparative to other parties. He said that he remained district president of PPP but he frustrated from present leadership because they failed to invite their PM to Chitral in 5 years.

At last flag hoisting of ANP flag ceremony was also held at Khurkushandeh and they pray for succession of the party. 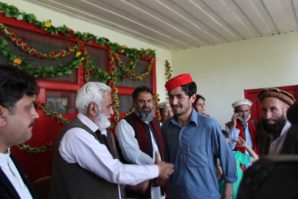 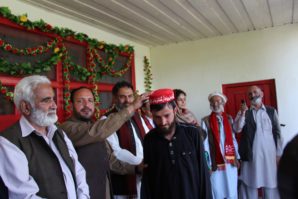 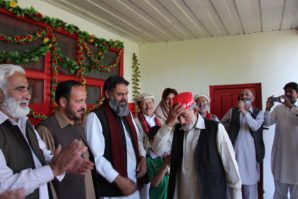 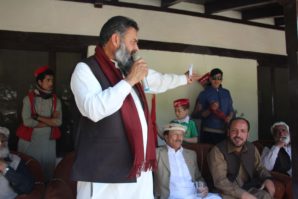