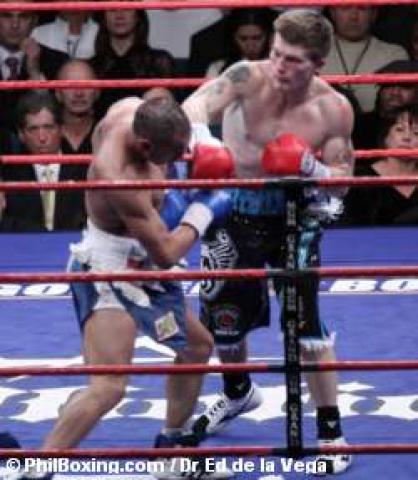 It’s going to be Las Vegas, Nevada instead of Wembley Stadium of the United Kingdom for the next Pacquiao-Hatton boxing match.
This was announced yesterday by Richard Schaefer, CEO of Golden Boy Promotions, and the company that handles the promotional fights of Ricky Hatton.

Inquirer.net: Negotiations for the May 2 showdown between Manny Pacquiao and Ricky Hatton took a huge step closer to completion Tuesday after the British slugger agreed to stage the light welterweight duel in Las Vegas.

Hatton promoter Richard Schaefer said the British ‘Hitman’ was finally convinced that the Las Vegas, not the 90,000-seater Wembley Arena in Britain, would be the best site to stage the much-anticipated bout.

‘Ricky’s preference was the United Kingdom but he realized that was not the best for this fight, just like the Philippines wasn’t’, Schaefer told Lance Pugmire of Los Angeles Times.

The decision of the venue for the Pacquiao-Hatton match has been put on hold for several days because the camp of Ricky Hatton wanted the fight to take place in London to accommodate the thousands of Hatton’s boxing fans in UK and in many parts of Europe. They suggested Wembley Stadium as the venue because of its huge seating capacity.

But the promoters of both fighters argue that Las Vegas will deliver huge revenues from gate receipts and pay-per-view hits as proven in the recently-concluded Pacquiao-de la Hoya ‘Dream Match’.

The only matter that remains to be decided with regards to the date and place is the choice of the specific venue which is either the MGM Grand or the Thomas and Mack Center of the University of Nevada.

Earlier the camps of Pacquiao and Hatton have started throwing jabs at each other as a way of generating public awareness for the forthcoming boxing match.

Manny Pacquiao is recognized as the world’s most popular professional boxer today after winning over the world’s best boxers like Juan Manuel Marqez, Morales, Barrera, Diaz and Oscar de la Hoya in their most recent fights.

Ricky Hatton is a British professional boxer who had an unblemished record until he lost to Floyd Mayweather, Jr. in their recent fight but immediately recovered by winning over Paulie Malignaggi late last year.