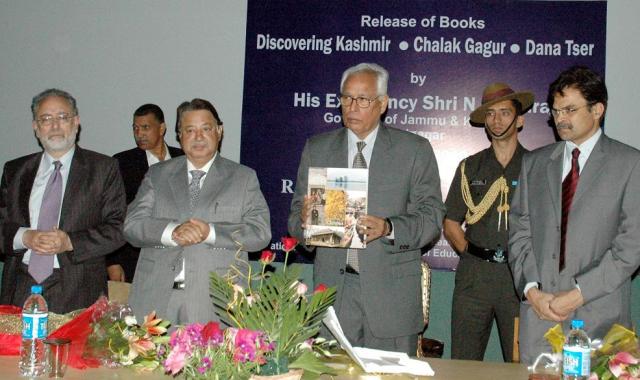 Srinagar, May 20  – JKGovernor, N. N. Vohra, said that the late Prime Minister, Rajiv Gandhi was, interalia, seriously interested in the growth of certain core areas of human development, especially literacy and education, adding that the Foundation had done a lot in this sector in Kashmir over the past many years.

The Governor was speaking after launching three publications brought out by Rajiv Gandhi Foundation at a function held here today. These publications are “Discovering Kashmir”, “Chalak Gagur” and “Dana Tser”. He said that the Foundation had made an outstanding contribution by developing an attractive teaching manual for school children studying in different classes.

The Governor complimented Rajiv Gandhi Foundation for doing a yeoman’s service in variant fields and making particular contribution towards the promotion of education and literacy in J&K.

He said that the step taken by Rajiv Gandhi Foundation to develop a teaching manual for middle school children of Kashmir, in collaboration with Creative Learning for Change, , is a laudable initiative. He observed that this will help the students to know more about through its history, geography, language, arts, architecture, natural environment, crafts, people, customs and culture.

The Governor while describing the manual, “Discovering Kashmir”, as a storehouse of knowledge, said that there is need for publishing such books which are attractive, easy to read and understand so that these create an exciting relationship between children and the source of knowledge. He said that the book, with excellent pictures and drawings, has demonstrated all about and Kashmiriyat. He lauded the Rajiv Gandhi Foundation for its effort to help the young minds to understand better and appreciate various components of their rich composite heritage.  He said that this manual could also be of immense importance for the tourists, especially the foreigners, to know almost everything about . He suggested that the State Tourism Department should ask the tourist guides to read this volume to better explain to the visitors about various facets of .

The Governor appealed to the Education Minister, Peerzada Mohammad Sayeed, to consider making ‘Discovering Kashmir’ a text book. He emphasized upon the Rajiv Gandhi Foundation to bring out such interesting and informative books about and Ladakh regions also for the benefit of the student community.

Referring to the release of ‘Chalak Gagur’ and ‘Dana Tser’, the Governor said that these story books in Kashmiri language will make interesting reading for children. He said that there is need for promotion of local languages and literature.

The Governor emphasized the need for innovating teaching strategies for better results. He said that the children are our future, adding that their proper orientation will help in making a prosperous State of the country.

Sayeed in his remarks said that is rich in culture and there is need for translating popular story books in different languages into Kashmiri and other languages of the State for the benefit of the children. He said that the late Mr. Rajiv Gandhi was a great visionary and his contribution to human resource development in particular is praiseworthy. He said that the late Prime Minister is also credited with lowering of the voting age from 21 years to 18 years for the greater involvement of youth in nation building.

The Minister also dwelt on various initiatives being taken by the Government for expanding and upgrading education infrastructure across the State to improve the quality and reach of education, as this being the key to all round development. He also spoke about the steps being taken for the promotion of female education and computer literacy. He said that side by side imparting quality education, the focus is also on moral education.

Chairperson, Help Foundation, Ms. Nighat Shafi dwelt on the activities of the Foundation.

Secretary, Rajiv Gandhi Foundation, , Dr. Gyanendra Badgaiyan, in his welcome address, gave details about the functioning of the Foundation. He also threw light on the various projects already taken in hand and those in the pipeline for promotion of education and literacy.

Dr. Showkat Shan and Ms. Suraya Rasool read out some excerpts from “Chalak Gagur” and “Dana Tser” on the occasion.

A power point presentation on ‘Discovering Kashmir’ was made by Feisal Alkazi of Creative Learning for Change, .