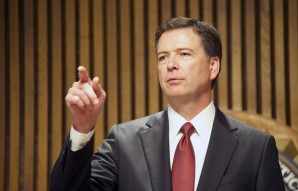 “These are not children living in some faraway place, far from everyday life,” FBI Director James Comey said at a press conference today at FBI Headquarters. “These are our children. On our streets. Our truck stops. Our motels. These are America’s children”, said FBI Director Comey. Picture courtesy of the FBI.

Today  the Federal Bureau of Investigation (FBI) announced the commencement of a nationwide enforcement action across 106 US cities that netted hundreds of arrests. Operation Cross Country VI, part of the Bureau’s Innocence Lost National Initiative, was conducted with the assistance of more than 8,500 local, state, and federal law enforcement officers representing 414 separate agencies.

In June 2003, the FBI, in conjunction with the Department of Justice Child Exploitation and Obscenity Section and the National Center for Missing & Exploited Children, launched the Innocence Lost National Initiative. This combined effort was aimed at addressing the growing problem of domestic sex trafficking of children in the United States.

In the 11 years since its inception, the initiative has resulted in the development of 69 dedicated task forces and working groups throughout the U.S. involving federal, state, and local law enforcement agencies working in tandem with U.S. Attorney’s Offices.

The FBI and its partners announced the results of its three-day law enforcement action in which 79 child victims of prostitution were recovered and more than 100 pimps were arrested.

According to the latest release:

“Operation Cross Country, an annual law enforcement action that took place last week in 106 U.S. cities, highlights ongoing efforts by the Bureau—together with the National Center for Missing & Exploited Children and our local, state, and federal law enforcement partners—to address the sexual exploitation of juveniles as part of our Innocence Lost National Initiative.

Since its creation in 2003, the Innocence Lost program has resulted in the identification and recovery of approximately 3,600 minors who have been sexually exploited.

This year marks the eighth Operation Cross Country, the largest such enforcement action to date: 168 trafficking victims were recovered and 281 pimps were arrested.”

HOW YOU CAN HELP!