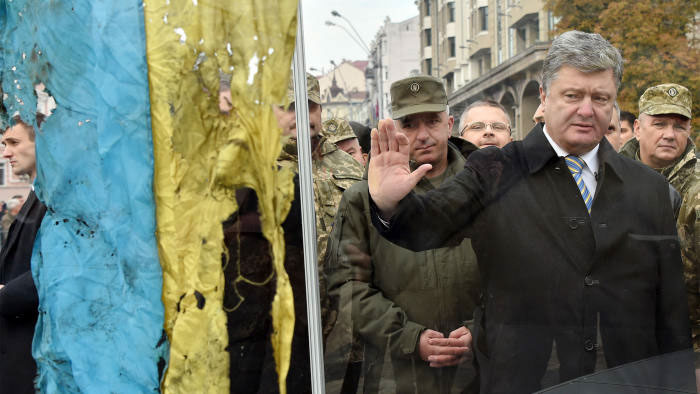 Since its very beginning, the revolution in Ukraine meant to be a fight against the corrupted regime and oligarchs and promised Ukraine a better tomorrow. A few years later the situation did not change for a bit, it became much worse. Today’s Ukraine is the real battlefield and it is not just about the Donbass conflict, it is about face-off between groups of militants which put their personal financial interests above the territorial integrity of Ukraine.

At the moment Poroshenko and the Armed Forces of Ukraine are not involved into the counterterrorist operation and defeating the rebels, but are anxious about how their schemes of cooperation with the rebel regions became known to the general public, including the oligarchs and their uncountable armies and the nationalists as well.

It is hard to believe that there is someone in the government of Ukraine who is able to explain why Ukraine buys coal from Rinat Akhmetov’s mines on the occupied territories, or why Luhansk and some other rebel cities receive energy from Ukraine’s territory which also is paid by the common Ukrainians. Poroshenko himself describes this with a questionable ‘commodity circulations’ and it can’t be considered as a reasonable explanation.

For Poroshenko and his closest associates the Ukrainian conflict turned to a gainful business that brings super profits and they are not going to abandon it despite the human casualties and direct financing of their enemies. The other parties of the conflict, the oligarchs and nationalists in the first place, also want to get their share and that is why they are ready to make a sacrifice of Ukraine’s well-being and keep the tensions in the country.

Obviously, the oligarchs and nationalists do not have any legal ways to get the power and today we already hear the call for a new Maidan on the 20th of February, 2017, which, probably, will trigger another wave of violence in fighting for the power in Ukraine.

Filed under: News, Politics
Share Tweet Pin G Plus Email
previous article: Dimension Data certified as one of the Top Employers United Kingdom 2017
next article: From being bullied to playing the bully: actor Kyle Meagher is “totally opposite” to characters he portrays