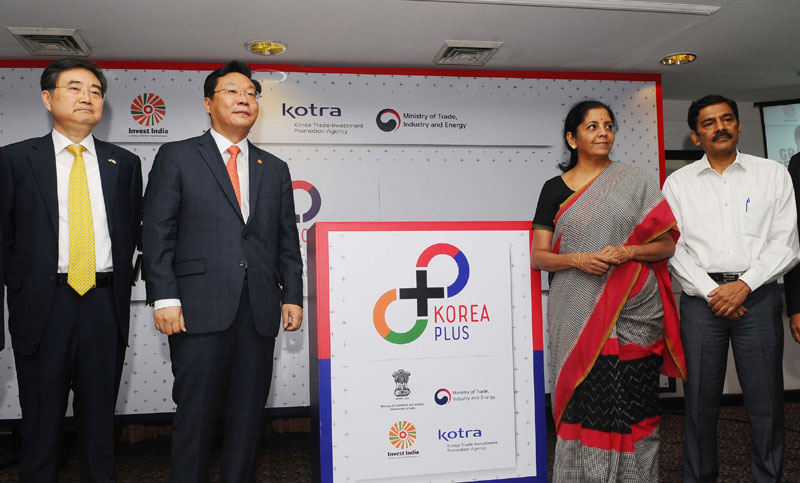 The Minister of State for Commerce & Industry (Independent Charge), Mrs. Nirmala Sitharaman inaugurating the office of KOREA PLUS, in New Delhi on June 18, 2016.

New Delhi (PIB-GR-TYP-BIN): The Commerce & Industry Minister Mrs. Nirmala Sitharaman and Mr. Joo Hyunghwan, the Minister of Trade, Industry & Energy, Government of the Republic of Korea, launched Korea Plus on June 18, a special initiative to promote and facilitate Korean Investments in India.

An MOU for establishing Korea Plus was earlier signed between the Ministry of Trade, Industry and Energy, Govt. of the Republic of Korea and Invest India, the National Investment Promotion & Facilitation Agency of India in January 2016. This MOU came as an outcome of the visit of the Indian Prime Minister to South Korea in May 2015.

The launch took place in the presence of Mr. Cho Hyun, the Ambassador of the Republic of Korea to India, officials of the Department of Industrial Policy and Promotion, Korea Trade Investment Promotion Agency (KOTRA), Invest India team and several Korean Business delegates.

The mandate of Korea Plus covers the entire investment spectrum including supporting Korean enterprises entering the Indian market for the first time, looking into issues faced by Korean companies doing business in India and policy advocacy to the Indian Government on their behalf. Korea Plus will act as a mediator in arranging meetings, assisting in public relations and research/evaluation and provide information and counselling in regard to Korean companies’ investing in India.

India and the Republic of Korea relations have made great strides in recent years and Korea Plus will act as a catalyst in making these relations even more robust.