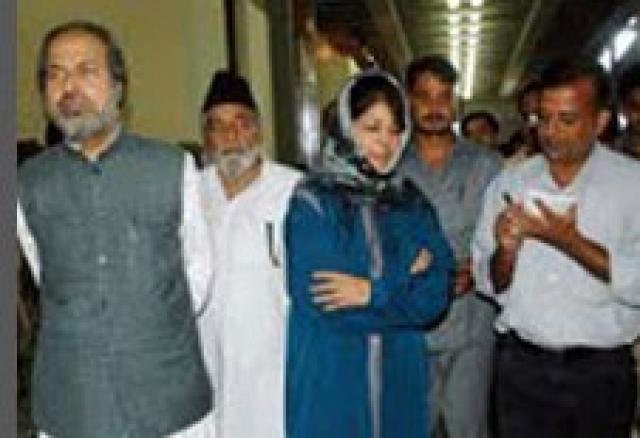 , February 3 (Scoop News):- Peoples Democratic Party President Mehbooba Mufti has said the law and order situation in the state has taken a dangerous turn as a result of the anti people policies of the government coupled with misgovernance and its total disconnect with ground realities.

In a statement today Mehbooba said that the National conference that has been promising people for decades a return to the constitutional position of 1953 has in the last just one year succeeded in throwing back the situation by many years. It seems the government is pushing the state into yet another cycle of destabilization, disruption and chaos, he said.

She said NC led government has lived up to the history of the ruling party in using state power to crush the aspirations of people. That is why it is no surprise that innocent and unarmed youth are brutally killed and put behind bars under the draconian PSA, she said and added that instead of unleashing brute force on people the government should try to solve problems faced by them.

Cautioning the government about the gathering momentum of anger and disgust against it Mehbooba said while political resolution of problem could not be delayed the government’s inability to solve day to day problems added to public unrest. She said even bare minimum requirements of ration and power are not available to common man. All sections of people have to come out on streets even to seek routine services and the chief minister weaves conspiracy theories to justify use of disproportionate force that has cost many precious lives and destroyed families.

Mehbooba said the government must understand the delicate nature of governance in the state as its failure to handle routine things has the potential of causing large scale alienation and leading to crisis situations. That in fact is happening now, she said and remarked that the government in its arrogance seems to be unable to do anything right.

Expressing shock at the insensitivity of the ruling group to massive human rights violations Mehbooba said this has again put the state on the boil. She said all kinds of forces that ruled the roost here prior to 2002 seem to have re emerged resulting in death and destruction at the hands of government forces and even ‘the unknown gunmen’ who have a historical bonding with NC. It is unfortunate that these dark forces reappear whenever NC gets into power she pointed out as is manifest from the Padam shri awarded to a killer recommended by NC patron Farooq Abdullah.

Mehbooba said the stakes for the country and the entire South Asian region are very high in . Unless the ground situation here is conducive to peace efforts as it had become after 2003, nothing could succeed in resolving the larger issues but the NC for its petty interests of survival seems hell bent to create chaos and confusion through its acts of omission and commission she added. She said NC politics has historically thrived on disruption and it is understandable that they promote chaos which however comes at a great cost to the citizens of the state.