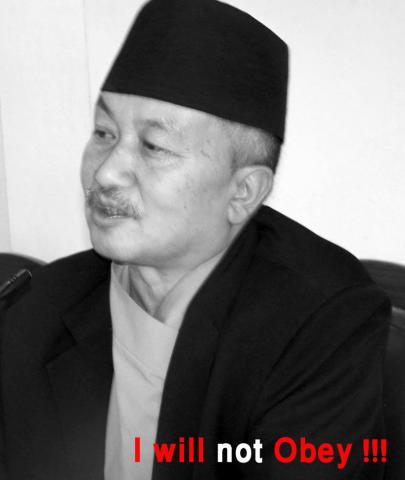 Kathmandu, Nepal: Constitutional Assembly Chairman Subash Nembang publically said that he will not   terminate murder convict Maoist lawmaker Balkrishna Dhungel’s Constituent Assembly membership and further said executing the court order is government’s duty. The issue of the Dhungel has been controversial to its practice of challenging the Supreme Court where the apex body has already given it’s verdict upon again and again.

As per Article 65 (c) of the Interim Constitution, conviction in a criminal offence involving moral turpitude should automatically lead to disqualification from CA membership. Article 67(B) of the Interim Constitution and Section 18 of the CA Member Election Act, 2007 add that the seat of such a CA member should be declared vacant and as per Rule 134, the CA chairman needs to inform the House if a member lacks the qualifications described in Article 65 (C).

Controversial as well as incompetent, the chairman has been ignoring the issue of his responsibility towards the government escaping the political slash. Dhungel, was convicted of murder of Okhaldhunga’s Ujjan Kumar Shrestha, where the Supreme Court has formally recognized and endorsed the legitimacy of the case again and again.  The case is surrounded with controversies of racial discrimination where Ujjain shrestha was killed for getting married to another community woman.

Lawmaker Dhungel, has been sentenced to life term on 3 January 2010 by the Supreme Court, and has been continuously taking part in lawmaking process, without considering the court’s verdict.

Nembang in his statement said, “I have done my research with the existing law and judgment of the apex court where I cannot remove anyone from CA unless the court has convicted him/ her, saying the offence was committed with moral turpitude.”

Mr Nembang saying he cannot see the judgment of the Supreme Court is a mockery of his understands and competence level. The question stand as Judicial system being above all, utters the convicted as guilty and still the administration refuses to obey the order is a shame for the understanding of any democratic practice. The judiciary is an independent body, lawmakers and politicians challenging it openly is not just a question but an issue of the morality and credibility.