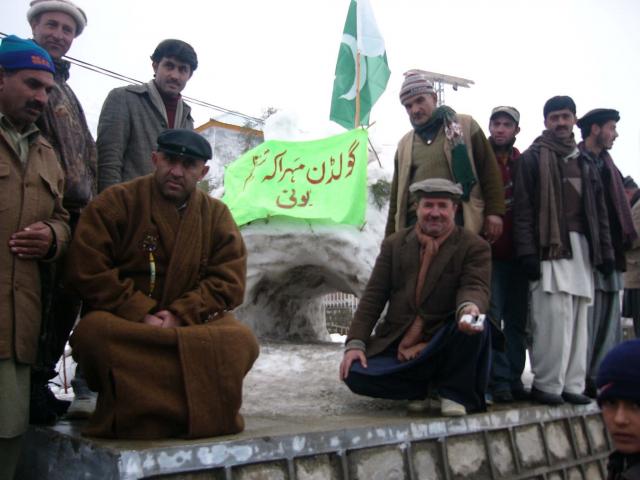 CHITRAL: Beyar Local Support Organization (BLSO) celebrated Lawari rail tunnel festival at Booni some 75 KM from here. District Coordination Officer Chitral Mutasim Billah Shah was chief guest on the occasion while District Nazim Chiral Maghfirat Shah presiding over the ceremony. Chairman BLSO Sardar Hussain said that after completion of Lawari Rail Tunnel new windows of development will open at Chitral and life standard of inhabitants of the district will be  enhanced by launching new projects and availability of maximum opportunities of employment and trade. But the nation who not hardworking and lazy can never develop. Tehsil Nazim Chitral Sartaj Ahmad Khan said that we never forget our benefactors like the first parliamentarian from Chitral Ataleeq Jafar Ali Shah who raised the voice for construction of the tunnel at the floor of assembly. The speakers paid rich tribute to Shaheed Zulfiqar Ali Bhutto the then Premier of Pakistan who not only had launched practically work of the tunnel but also sending food and fodder in aero plane for the people of Chitral even for our cattle. District Nazim Chitral Maghfirat Shah also thanked Parvez Musharaf the then president of Pakistan who completed the tunnel. He stressed upon the nation to be ready to embark new challenges after completion of the tunnel and assured for legislation to preserve property and land of Chitral people.
District Coordination Officer Chitral Mutasim Billah Shah said that the district administration of Chitral would never ignore any opportunity for development of Chitral. He while hailing Chitral people said that being a civilized and polite nation you must to maintain your this standard after completion of the tunnel where most people outsiders expected to be arrived here.  He said that the district admin want to arrange a function and to invite all Korean and foreigners engineers, technical non technical staff and daily wages labor for giving them thanks with a proper way and to offer a dinner in their honor. He highly hailed the efforts of BLSO for arranging this colorful festival and celebrating thanks giving day. The festival was concluded with the prayer words of Maulana Qadir Shah Nazim Union Council Mulkho. Later on BLSO members distributed sweets among the participats to express heir pleasures on the this occasion. The speakers termed that after construction of Lawari Tunnel people of Chitral feeling themselves Pakistani first tieme because in past they remained disconnect from other sorts of the country. Those who spoke on the occasion were Sikandarul Mulk Nazim Tehsil Mastuj, Qayum Baig Nazim Torkho, Muzzafar social worker and member BLSO and local representatives.  Earlier those dwellers of Reshun, Koragh and other village also celebrated the festival that distributed sweet dishes among the commuters. On conclusion of the speeches of guest a cultural show was also held where small kids and local youth presented traditional and folk dance to celebrate the day and to enthrall the participants. A large number of people participated the festival despite chilly cold weather and were setting over snow bound ground.
G.H. Farooqi PO Box No. 50 GPO  Chitral Pakistan phone No. 0943-302295, 414418, 03025989602
Website: www.dailychitral.com
Email: gulhamad@gmail.com,gulhamad786@hotmail.com,gulhamaad@yahoo.co.uk
Filed under: Music & Film, World
Share Tweet Pin G Plus Email
previous article: TEN TYPES OF MEN YOU MEET IN LIFE
next article: India has around 60% heart-disease patients