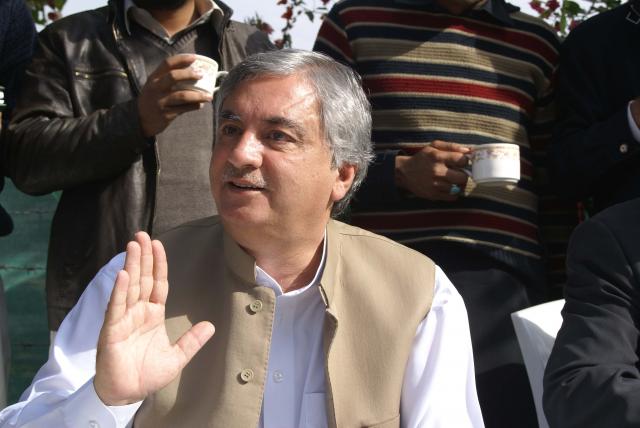 By: Gul Hamaad Farooqi
CHITRAL:  Chitral delegation meet federal Minister for communication Dr. Arbab Alamgir Khan Khalil at his residence at Islamabad.  The delegation comprising over MPA  upper Chitral Haji Ghulam Muhammad, Wing Commander retired Fardad Ali Shah, SP retired Saeed Khan Lal, former Tehsil Nazim Sartaj Ahmad Khan, president Trucks owners association Haji Muhammad Shifa, PPP leader Haji Enzar Gul and other elites and peoples students federation members. They requested federal minister for communication  to direct National Highway Authority for opening Lawari Tunnel at least 4 hours a day because main road of Lawari top have been blocked due to heavy snowfall and it will be remained close until May. They also request him to facilitate passengers going and coming from Chitral at South and North portal of the tunnel and allow them to travel inside the tunnel on daily basis. Wing commander  Fardad Ali Shah said that work has been suspended on the tunnel for more than 4 years and it should be delay until opening of the main road at Lawari top. He said that Korean construction company can work 18 hours and open if for traffic for 4 hours to facilitate Chitral people to travel indie the tunnel. Sartaj Ahmad Khan convinced the federal Minister that Lawari top is the only land route connecting Chitral to other sorts of the country but due to heavy snowfall it is close for all type  of vehicular traffic and inhabitants of Chitral facing great hardships. He said that Lawari tunnel is the only source of communication and it should be open at winter season for traffic because Chitral has been besieged in this season due to closing of its roads by snowfall. Federal minster was looking under great tension and could not decide on the spot  due to some problem at his office hence he assured Chitrali delegation that he will inform them within two days. Hence no action was taken until filling of this report.  The delegation returned back from Islamabad looking frustrated. It is worth to mention here that excavation work on Lawari tunnel was started in Parvez Musharaf regime its first phase was completed in last December 2007 but work stopped on tunnel during PPP government. Local people gossip that government start work on the tunnel when election time is very close and it will be cashed for getting vote from Chitral people.
G.H. Farooqi C/O Manager bank Islami Main branch Chitral phone No 0943-320737, 0943-316052, 0943-414418  , 03025989602, 03337069572, 03159698446, 03469002167
email: gulhamad@gmail.com
Filed under: Lifestyle, Opinion
Share Tweet Pin G Plus Email
previous article: Chitrali Delegation meet Federal Minister for communication
next article: Bad Breath: Causes, Effects, Prevention and Treatment as per Orlando Family Dentistry