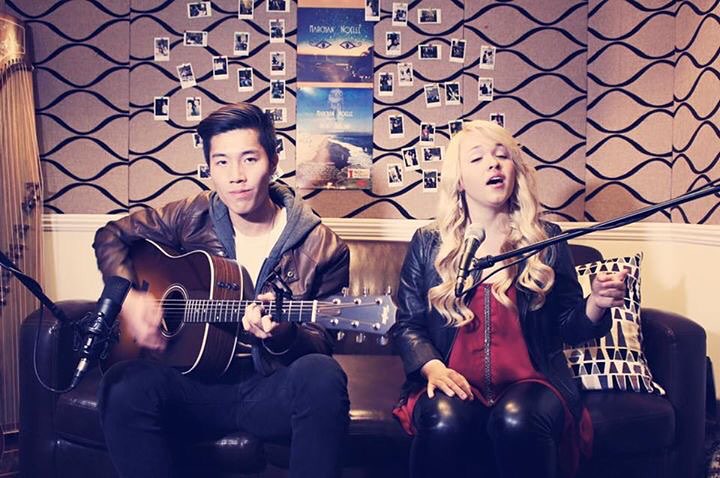 International guitarist Teddy Fan is no stranger when it comes to touring. Since early this year, he’s toured with YouTube star Jason Chen, performing both acoustic covers and original songs for audiences near and far. In 2015, Fan toured all over the U.S. with Country-Pop artist Christie Huff, and early this upcoming fall, Huff, Fan and band are about to hit the road again.

The pair was introduced to one another last October by a mutual contact after Huff expressed her need of musicians in order to start a band. “I met with Teddy first, and I owe finding the musicians for my band to him,” Huff said. Fan was named Huff’s “band leader,” and was responsible for seeking out, auditioning and compiling the best musical talent possible to form a band. “Before I picked a member, I made sure they were dedicated and hardworking,” Fan said, explaining his band member selection process. “I knew I didn’t want to play with someone who didn’t prepare their part before rehearsals and shows. That would’ve been a waste of our time.”

At the moment, the Huff’s band is comprised of Huff on vocals, Fan on the electric guitar, Brian Singer Cleves on bass, Lucas Bomeny on drums, and Max Pfisterer on the electric guitar. “Teddy is the one who helped get the ball rolling for me. If it wasn’t for him, I may still be in search of a band,” Huff stated.

In addition to finding the members for Huff’s band, Fan is also responsible for ensuring their readiness prior to each performance. “As a band leader, my main job is to make sure every song we play sounds good in addition to providing a great performance at each show. Christie really trusts me, so she’s asked me to help organize our rehearsals,” Fan clarified. In just California alone, the group has played at the Viper Room, Borderline Bar, Bar Lubitsch, Gas Lamp Long Beach, Amnesia, and The Dresden, to name a few.

“Teddy is an important role in ensuring the success of each show my band puts on because he is an excellent guitar player and brings a lot of character to my band. My fans are a fan of me and my music, but they also love my band. A big reason why they love my band is because they love Teddy. He brings an energy and talent to the band and live performances that no one else could ever bring,” detailed Huff.

Before each gig, the band piles in a SUV, which pulls along a rented U-Haul filled with their gear as they travel from place to place. A tour manager aides in booking the venues and takes care of any connection issues involved, leaving Huff, Fan and the rest of the gang able to focus solely on their music and upcoming performance. For regular, local gigs, which usually take place 2-4 times per month, Huff and band hold at least two rehearsals prior to each show in order to make sure that everyone is ready to go. However, when it comes to touring, a month’s worth of time is needed in order to accurately prepare.

Last year, the band traveled to Utah and Idaho, where they played shows at the University of Utah, Kiby Court and Sodlicious in the former state, and at Whiskey Jacques and Skizzy’s in the latter. Somewhere between 50-100 people attended each show, depending on the size of the venue.

Regarding the songs performed at each gig, Fan explained, “We mainly play our original songs, but we do play some cover songs from time to time. Most are well known songs that we cover, like “Digs,” “The Way You Got Away,” “Ho Hey,” “and “Heartbeat.” We also play mash-up songs, mainly arranged by Katsuya (Fan’s teacher). For those, I come up with ideas for the guitar part, and then we all just play around to see what sounds the best.”

Come September, Huff and her band will take off on the “Roll The Dice” tour, which will tour different cities in Colorado and Huff’s home state of Arizona. This tour is expected to be even more polished than the last, with longer shows held at even bigger venues.

“Christie is a hard worker, motivator and hustler. I love working with her. She has a great energy on stage, is always prepared and consistently does her best when singing at our performances,” Fan fondly recalled.

Similarly, Huff mentioned, thinking equally as highly of her guitarist, “There are so many reasons why I wanted to work with Teddy over everyone else. Aside from him being a great musician, I want to work with him because he is very reliable, helpful and easy going. There are so many talented musicians out there who just aren’t dedicated or reliable. Whenever I have a concern about something with the band, Teddy is the first person I turn to for leadership. He is also very dedicated to me and my music. I’ve worked with musicians in the past who just see being a part of my band as another job. They don’t go the extra mile to make my band great. But Teddy goes the extra mile to make sure my band is progressing and is successful.”

Huff, Teddy and band are holding their next show on August 18, 2016 at Bar Lubitsch in West Hollywood, California.

Filed under: Lifestyle, Music
Share Tweet Pin G Plus Email
previous article: What everyone must know About Trekking Adventure
next article: How to Achieve Business Success – Five Glimpses into the McDonald’s Way