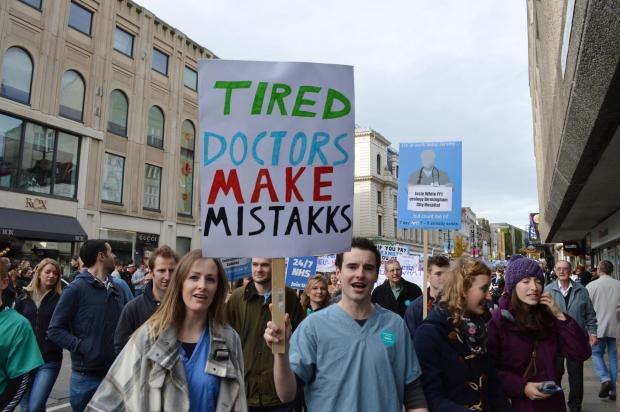 With new discussions underway about the proposed junior doctors’ contracts, patient safety and medical negligence are now once again in the limelight. The proposed new contracts would extend “unsociable” hours for junior doctors, reclassifying Saturday work as a normal working day; alongside this, junior doctors’ pay would not increase, and may in many cases decrease: a situation of more work for less pay, which has many doctors and commentators fearing for patient health.

Talks between the British Medical Association and the government continue to break down, with the government continuing to put the imposition of the contracts on hold. While many have been concerned as junior doctors go on strike during these negotiations, the real fears that many hold are in relation to the long-term safety of patients being cared for under doctors bound by these contracts: a letter to Jeremy Hunt, Secretary of State for Health, notes that the proposed contracts could risk “a return of exhausted doctors and rise in medical errors inherently linked to clinicians forced to work under such unsafe conditions.”

The legal burden on the NHS as a result of these medical errors is unlikely to be minor; instead, medical negligence cases are already costing the NHS a significant amount: an amount that is only likely to increase with tired, overworked doctors.

The Legal Costs of Medical Mistakes

NHS spending on preventable harm and medical negligence is already in the realm of £2.5 billion each year. The NHS Litigation Authority spends around £1.3 billion each year on litigation costs, which to many people seems disproportionate and unnecessary.

Jeremy Hunt himself has raised the issue of this financial burden on the NHS, and notes that “these are large sums of money which the NHS is potentially wasting.” However, litigators actually working in this field have a different view. A representative from Patient Claim Line solicitors notes that due to the red tape involved in working with the NHS, legal claims can take a significant amount of time to process and get through the system. Some cases can take up to six months before the problem is accurately identified, and numerous lawyers have noted that the NHS “drags its feet” when processing claims, contributing to the costs that it ends up shelling out.

These costs are no small amount, either — in the past five years, NHS trusts have paid out over £4.5 billion in medical negligence claims. This draws further attention to the increasing costs of medical mistakes, and Hunt fails to recognise that by imposing the new junior doctors’ contracts, and the likely resulting rise in medical negligence claims, costs on the NHS will likely increase even further. All of this points towards not only a rapidly increasing legal bill, but also rapidly decreasing patient confidence in their care.

So far, the contract discussions have led to four walkouts between January and May this year, causing tens of thousands of operations to be cancelled. Numerous doctors have indicated that they would leave the UK and search for work elsewhere if the contracts were to go through, with one survey finding that around 90 percent of junior doctors were having misgivings about staying and working in the UK.

In any event, the 152 foundation trust hospitals in England cannot be legally forced to implement the new contracts with their junior doctors, but there has been some indication that they may face funding cuts if they choose to resist.